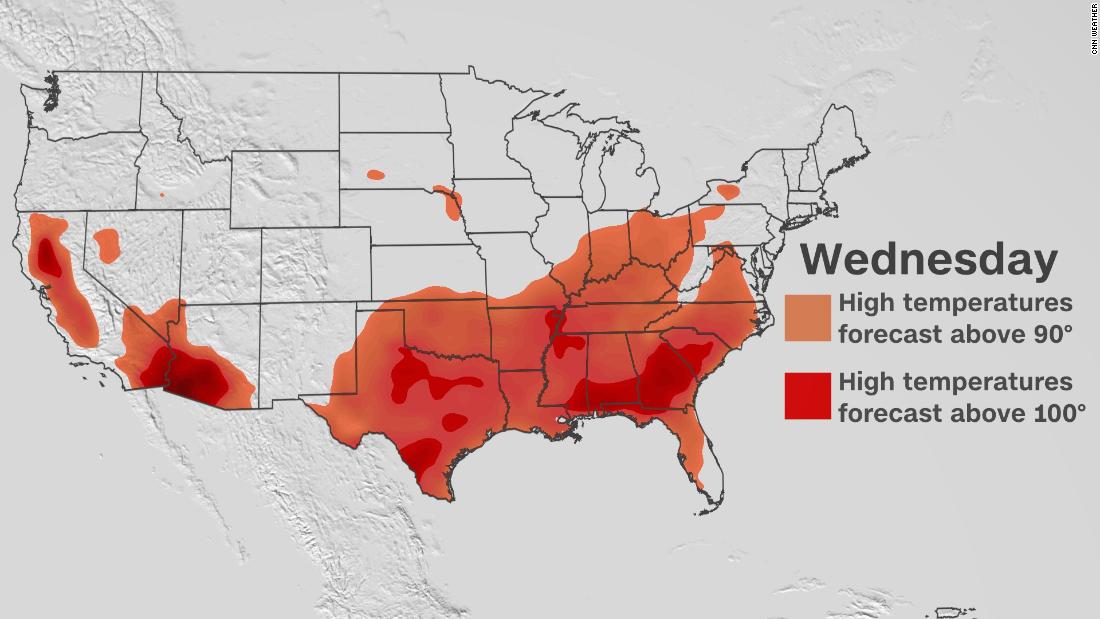 The worst of the latest heat wave is expected to be in the South, with triple-digit temperatures possible in Dallas, Houston, Austin and San Antonio in Texas, and New Orleans and Atlanta.

And there’s no relief in sight. About 65% of the entire US population will see temperatures above 90 degrees over the next week, and almost 60 million will be sweltering in temperatures at or above 100.

Officials in New Orleans have warned the heat index could be as high as 115 degrees this week, and the city has set up several cooling shelters.

At 10 a.m. Wednesday, it was already in the 90s in some areas of Louisiana, the National Weather Service in New Orleans tweeted, and the heat index at Mississippi’s Pascagoula Lott International Airport was 105.

It’s the second heat wave in as many weeks for many parts of the country. An enormous heat dome across the eastern US and the Midwest created record high temperatures in several cities last week.

At least five people died of heat-related causes last week — four in Georgia and one in Tennessee.

Power companies in the South surveyed by CNN earlier said they were prepared for this week’s heat wave.

“This is our ‘Super Bowl’ that we prepare all year for,” Tennessee Valley Authority (TVA) spokesperson Scott Fiedler said in a statement to CNN. “TVA is extremely well-positioned to meet power demand during this week’s hot weather. As you know, temperature and load go hand in hand. So we should see high loads the rest of this week.”