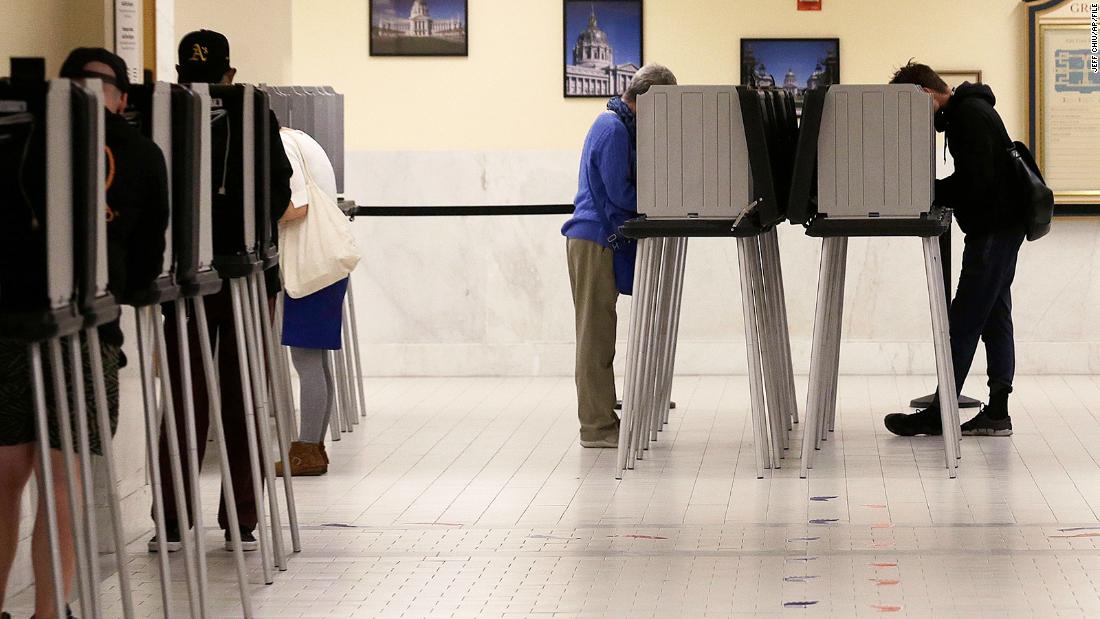 And that’s where we begin our statistical journey today.

My interest in examining Asian American voters within the context of the larger electorate came about because of what has arguably been the political earthquake of the year thus far — the June 7 recall of progressive District Attorney Chesa Boudin in deep-blue San Francisco.

That election result and other data reveal that Asians are still likely to vote Democratic on the whole, but the party has seen a disproportionate decline in support among this group.

Let’s start with the national polling. As I mentioned at the top, it’s hard to get national polling that tracks Asian voters specifically. I would therefore take these trends as preliminary.

That’s far greater than the drop he’s had with the electorate overall. Biden’s net approval rating has averaged about -14 points this year in Pew polling. He won the 2020 election by a little less than 5 points, according to Pew data. That puts his net approval rating about 19 points lower than his margin over Trump in 2020.

A peek at the generic congressional ballot shows that these trends are not happening in a vacuum.

Pew’s March poll gave Democrats a 28-point advantage among Asians on the ballot test, which asks voters which party they would support for Congress in their districts. That’s 16 points lower than the margin Biden won them by in 2020. The same generic ballot had Democrats and Republicans tied among all voters, which is only about a 5-point drop for Democrats overall compared with Biden’s 2020 margin. So the dip in Democratic support among Asian voters looks to be about 3 times as large as it is overall.
The Cooperative Election Study, a large academic data set, showed something quite similar in its late 2021 survey.

Biden’s overall net approval rating was -7 points among those who said they had voted in the 2020 election. He beat Trump by about 3.5 points among this group. This makes for about a 10-point drop.

This means Biden was down more than twice as much among Asians than among voters overall.

And like with the Pew data, the generic ballot, according to the Cooperative Election Study, reflects what Biden’s approval rating would suggest: a disproportionate Democratic drop with Asian voters.

Democrats led the 2022 generic ballot by 29 points among Asians who said they had voted in the 2020 election. That’s a 9-point drop from Biden’s 2020 margin.

Among all voters who said they had cast ballots in 2020, Democrats led by 3.4 points. Ergo, the margin was the same for the 2022 congressional ballot test as it was for the 2020 ballot test.

This isn’t just a polling phenomenon. Let’s go back to San Francisco, which ranks in the top 10 US counties with the highest percentages of Asian residents. Specifically, we’ll concentrate on precincts where Asians make up at least 75% of the population.
Support for the recall reached at least 60% in all these precincts and north of 70% in a number of them, as you can see from data collected by Chris Arvin.

There was a clear positive correlation between how many Asians resided in a precinct and how many votes there were to recall Boudin. That was not the case for any other racial or ethnic group.

Those same precincts still gave Democratic Gov. Gavin Newsom more than 60% of the vote in this year’s top-two gubernatorial primary. It’s not like they are full-blown Republican or anything like that.

The heavily Asian precincts (or election districts) in Queens, the most Asian borough in New York, tell a different story. Adams won Queens precincts that are at least 75% Asian by 16 points. De Blasio won those same precincts by 34 points, according to data collected by Matthew Thomas.

Again, I would view this data as preliminary, though it’s pretty consistent. And while Asian Americans are a small slice of the electorate, the fact that their numbers are growing and Democrats need all the help they can get right now makes this another worrisome data point for them ahead of the 2022 and 2024 elections.

Speaking of Democrats being in trouble, it’s not good news for them anytime a Democrat can reasonably be compared to former President Jimmy Carter during his time in office. But it’s tough to not see some of the similarities between the Carter presidency and the Biden one.

At the most basic level, Biden was elected to restore dignity to the White House after the Trump years. Carter was elected to restore dignity and trust after Watergate and Richard Nixon’s resignation.
Biden’s presidency has hit a major roadblock in large part because of inflation. Inflation is worse right now than in any election year at this point since 1980 (when Carter would go on to lose to Ronald Reagan).
Biden’s approval rating on inflation stood at 23% in a Fox poll out last week. Carter’s was 22% in a Gallup poll the July before the 1978 midterms. (Biden’s disapproval rating of 71% is actually higher than Carter’s 66%.)
Gas accessibility was a major problem for both men. Right now, gas prices are up more than 60% from where they were a year ago, and Biden’s approval rating on the issue is in the 20s. Carter saw his poll numbers decline because of a gas shortage.
The problems with inflation and gasoline have spurred a lack of consumer confidence. The preliminary June consumer sentiment index from the University of Michigan was lower than it has been since the survey started in 1952. The previous lows were in 1980, just before Carter was defeated for reelection.
Carter’s issues back then spurred talk of a primary challenge, as they have for Biden.

Of course, Biden’s and Carter’s trajectories do have their differences. Some of them are good for Biden, and others aren’t nearly as good.

Carter’s plight within his own party was considerably worse than Biden’s current status. Carter was already trailing in polls for the nomination against Ted Kennedy at this point in 1978. Biden is still ahead of the Democratic field, even if he is polling below 50%.

Perhaps most relevant for this year, Carter’s net approval rating overall was positive (if barely) at this point in his tenure. Biden’s is -15 points.

It wasn’t until later in his presidency that Carter’s popularity bottomed out. This allowed for his Democratic Party to limit its losses in the 1978 midterms and maintain its majorities in the House and Senate.

Biden’s unpopularity, along with significantly smaller Democratic majorities in the House and Senate than Carter had in 1978, will likely sink his party in these midterms.

Put another way, Biden is likely to have a far worse midterm election this year than Carter did in 1978.

Biden, though, is only in the second year of his presidency, so he has time to turn things around. The worst of the economic crisis occurred in Carter’s reelection year, while the current difficulties of the economy may be improving by the time Biden’s name is potentially on the ballot again, in 2024.

To all the fathers out there, hopefully your children treat you right. Unfortunately, they don’t think your day is as important as the day for their mother.

A 2012 CBS News survey found that 72% of Americans said Mother’s Day was more important to them when asked to choose between that and Father’s Day. Only 13% picked Father’s Day.

Ten percent opted for the middle ground (thinking both days were equally important).

Juneteenth knowledge grows: Sunday also marks Juneteenth. This year, 59% told Gallup they have a lot or some knowledge of the holiday. Last year, only 37% did. Moreover, 63% believe Juneteenth should be taught in public schools — up from 49% last year.
Belief in God hits record low: A different Gallup poll found that 81% of Americans now believe in God. That’s down from 92% in 2011 and 98% in 1967. Only 68% of Americans under the age of 30 and 62% of liberals believe in God.
Twitter is for politics: A new Pew report shows that 33% of tweets from American adults are political in nature. This includes 44% of retweets.