Analysis: How Trump chose an 'apparently inebriated' Giuliani over his campaign team 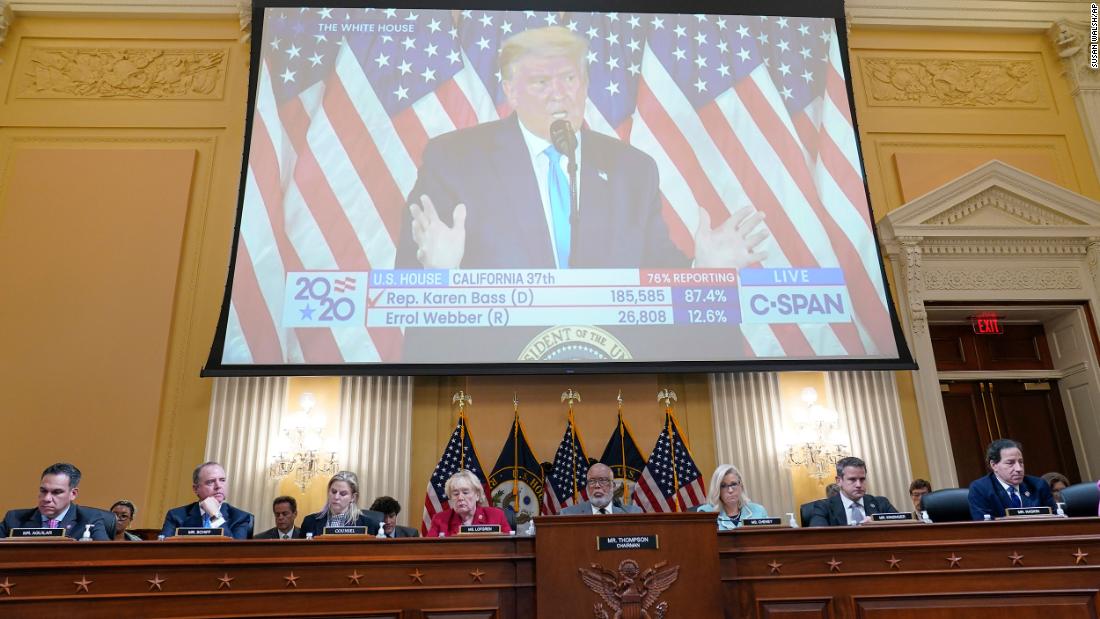 If the purpose of the inquiry is to create a series of indisputable facts — that Trump knew, or should have known, he had lost the election and that the allegations of fraud were ridiculous — this hearing convincingly started to fill in the gaps, leaning heavily on the prior testimony of former Attorney General Bill Barr, who used blunt language to dismiss Trump’s lies.

His inner circle knew. Top officials from Trump’s campaign and his White House said they had told the former President he lost the election and that it wasn’t stolen from him.

Rather than believe the people who ran his campaign and wanted him to wait for the votes to be counted, Trump turned instead to the ravings of Rudy Giuliani, who was “apparently inebriated” on election night, per an opening statement from Republican Rep. Liz Cheney of Wyoming, the vice chairwoman of the committee.

The descriptions of election night — when Trump declared the whole election a fraud that had been stolen from him — are a key element of the committee’s presentation.

RELATED: The 14 most compelling lines from the hearing

Bill Stepien, who ran Trump’s campaign, did not show up for in-person testimony after his wife went into labor Monday morning. Committee members instead played portions of his earlier private deposition.

Stepien’s testimony was dispassionate and direct and described how he had tried to shield Trump from Giuliani’s ideas on election night and later how he had been sidelined by Trump for not buying into the election lie.

Stepien said he had told Trump to avoid making a pronouncement on election night and to wait for votes to be counted in key close states. Instead, Trump took Giuliani’s advice and said he had won the election and that the results were a fraud.

Stepien later said that what had led him to leave the campaign after the election was his feeling that what was happening was not “honest or professional.”

Barr noted in video of his deposition that the committee aired on Monday that Trump had made these fraud allegations “before there was actually any potential of looking at evidence.”

In fact, as we know from Trump’s public statements, he had been priming to question the results for weeks or months.

Where is Stepien now?

Interestingly, Stepien is advising the Trump-endorsed candidate Harriet Hageman, who is challenging Cheney in Wyoming’s Republican congressional primary and who has cast doubt on the 2020 election results.

The committee played lengthy video excerpts from Barr, who talked in his private depositions about being asked by Trump to look at fraud claims.

Video of Barr, along with live testimony from a former US attorney in Georgia and a former Philadelphia city commissioner, went allegation by allegation through baseless claims of fraud made by Giuliani and Trump in the weeks after Election Day.

Exactly zero of the conspiracy theories have been proved — and there are logical explanations for what actually happened.

Telling the truth led to threats against officials and their families

Al Schmidt, the former Philadelphia city commissioner and Republican who would not buy into the election lie, said he and his family were the subject of threats after Trump singled him out in a tweet.

“After the President tweeted at me by name, calling me out the way that he did, the threats became much more specific, much more graphic. And included not just me by name but included members of my family by name, their ages, our address, pictures of our home.”

As he was publicly attacking the election his campaign knew he had lost, Trump raised money with up to 25 fundraising emails each day, according to committee member Rep. Zoe Lofgren, a California Democrat.

Most of the money went to Trump’s Save America PAC. It spent millions on a rally near the White House on January 6 and sent money to Trump’s political allies, including then-White House chief of staff Mark Meadows.

“The ‘big lie’ was also a big ripoff,” Lofgren summarized.

The most important parts of the public hearings so far have come from recorded testimony — from Barr, Stepien and Miller.

We’ve already seen Miller argue that some of his words were taken out of context, although the thrust of what the committee said — that Trump had been told the data was clear that he lost — remains.

The nature of the hearing, without Trump supporters to cross-examine, was very one-sided.

Republican leaders aside from Cheney and Rep. Adam Kinzinger of Illinois refused to take part in the committee. Later, House Speaker Nancy Pelosi rejected their plan to put Trump loyalists like Reps. Jim Jordan of Ohio and Jim Banks of Indiana, who voted against certifying the 2020 election results, on the panel.

As a result, there is no one at these hearings defending Trump.

We have an idea. Here’s what Cheney said during last week’s prime-time hearing will be covered in the remaining hearings: