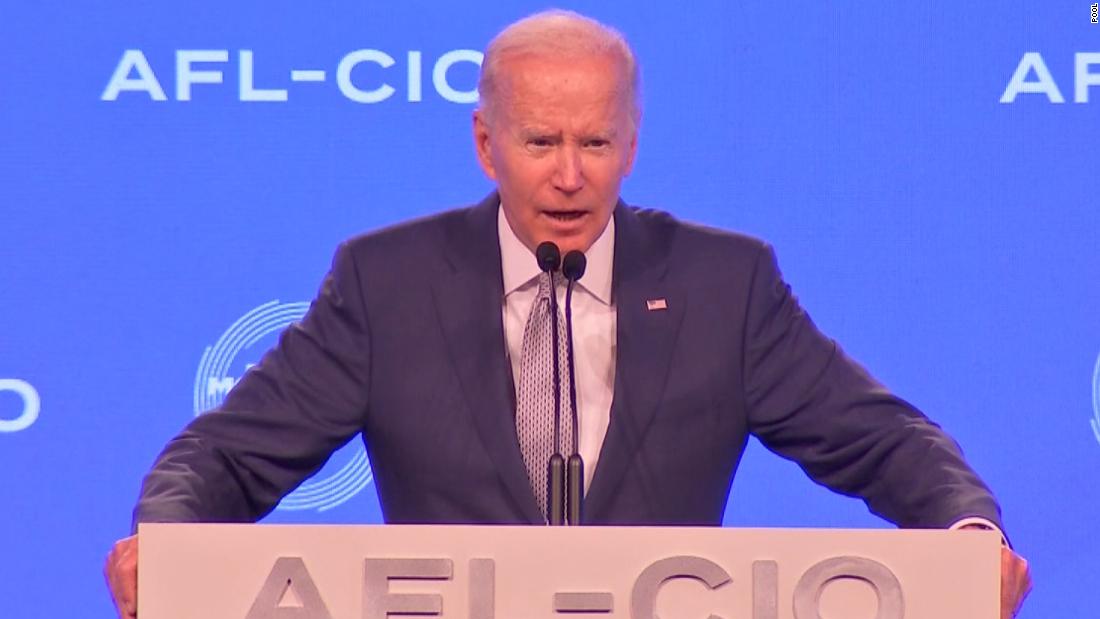 During the speech, Biden touted his administration’s efforts to aid the nation’s recovery from the coronavirus pandemic, including the Covid-19 relief bill and the bipartisan infrastructure law.

“While it was going on, America created more … billionaires during that crisis in 2020 than any year in history. Talk about a contrast. Ordinary people getting, waiting in line for an hour for a box of food, and the policies of the past created more billionaires than ever in American history. Folks, it’s hard to believe, but it’s true. That’s what we inherited,” Biden said.

But without many options to fight price hikes, the President drew a contrast between his economic policies and the plan put forward by the leader of the Senate Republicans’ campaign arm, Sen. Rick Scott of Florida. The President has been leaning into criticizing what he describes as an “ultra-MAGA agenda” on the right as part of his messaging heading into November’s midterm elections.

The White House has been trying for months to demonstrate its commitment to dampening inflation and bringing down soaring prices that are placing stress on millions of American families. But the President acknowledged earlier this month there is little he can do to lower the cost of gasoline or food in the immediate term.

The President and his administration have repeatedly pinned the blame for rising gas and energy prices on Russian President Vladimir Putin and his unprovoked invasion of Ukraine, though other factors, including high demand, clogged supply chains, rising housing costs and Covid-19 stimulus efforts have also been cited by experts as reasons behind the surge.

Measures that Biden has taken to try and combat price hikes — such as record-breaking releases of crude oil from the US’ strategic reserve — have not worked; for the first time ever, a gallon of regular gas now costs $5 on average nationwide, according to AAA’s Saturday reading.

Combined with a dropping stock market and intense warnings from high-powered CEOs, the economy has become the White House’s top political problem and priority. But the President’s spokesperson argues that Americans will be able to weather the economic storm thanks to their actions since Biden took office.

“We know that families are concerned about inflation and the stock market. That’s something that we are aware of. We know that what we’re seeing right now is what we’re facing are global challenges,” White House press secretary Karine Jean-Pierre told reporters Tuesday.

She added, “The American people are well positioned to face these challenges because of what we’ve done the past year and a half on dealing with the economy… but yes, we are watching this closely.”

US stocks have plunged into a bear market, which happens when stocks close down 20% or more from their most recent high. A closely watched inflation report showed prices rising 8.6% in May, which is the fastest rate since 1981.

CNN’s Betsy Klein and Allison Morrow contributed to this report.