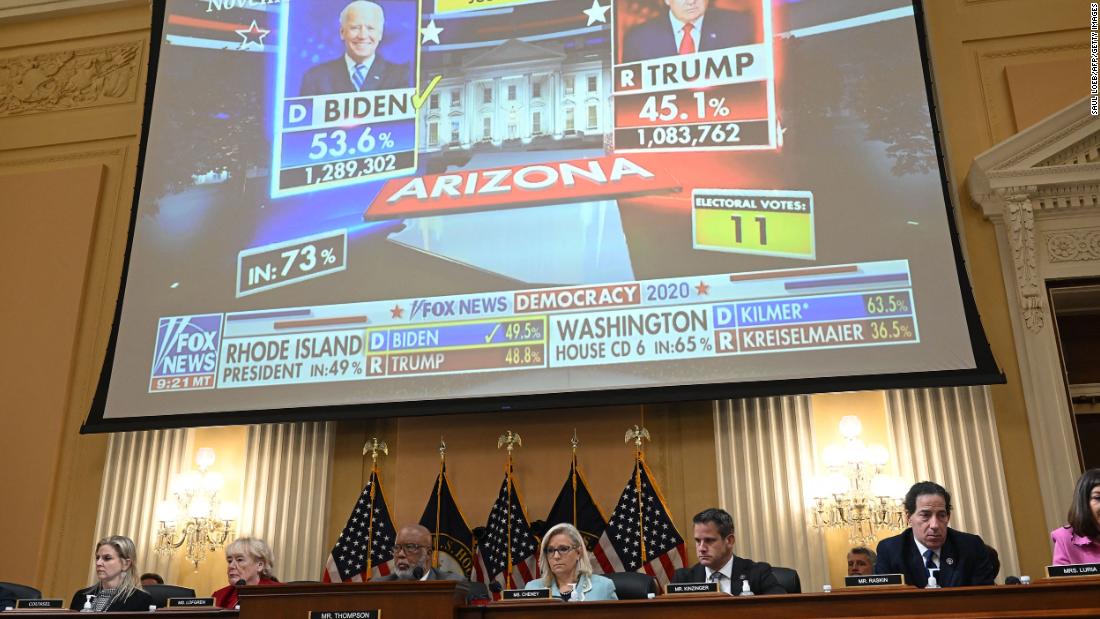 Those examples of Trump’s relentless post-election fundraising flashed on a screen Monday during the public hearing of the House committee investigating the January 6, 2021, attack on the US Capitol. The panel sought to demonstrate in its second public hearing that the former President had ample proof from many people in his inner circle that his claims of election fraud were baseless, but he still peddled them in the race to collect massive campaign sums in the waning days of his presidency.

The roughly $250 million that poured in after the election largely went to the former President’s political action committee, rather than to the “election integrity” effort touted to his donors, the committee said.

“The big lie was also a big rip-off,” said California Rep. Zoe Lofgren, one of the Democrats on the panel. After the hearing, Lofgren told CNN that the committee also has found evidence Trump and members of his family have personally benefited from donations that were advertised as going toward election fraud claims.

Trump aides did not immediately respond to requests for comment about the committee’s probe into his fundraising activities.

Adav Noti, a former Federal Election Commission official who is now vice president and legal director of the Campaign Legal Center watchdog group, said the committee painted a clear picture of underhanded activity by the former President and his team.

“If anybody else had raised $200 million under such obviously false pretenses, they would be prosecuted in federal court for fraud,” Noti said. “To raise that amount of money from unsophisticated donors, based on manifestly untrue statements, is what fraud prosecutions are made of.”

But Noti said that doesn’t mean that the Justice Department would seek to pursue what he said would be a “novel” fraud case over misleading fundraising appeals, particularly involving a then-sitting president.

It’s no secret in Washington political circles that Trump has raised unprecedented amounts for a former President — and has stockpiled enormous sums, rather than funding many of the long-shot efforts he promoted to overturn President Joe Biden’s victory. (At the end of April, Trump’s PAC, Save America, had $112 million remaining in the bank, according to its most recent filing with the Federal Election Commission.)

But on Monday, the House committee attempted to lay out a money trail out for the public — and potentially for federal prosecutors — in a dot-connecting video presentation.

In the weeks after his loss, Trump’s political operation took in some $250 million — with roughly $100 million landing in the first week after Election Day, Amanda Wick, a senior investigative counsel for the committee, said in the video.

But Trump’s political action committee, Save America — rather than the “Official Election Defense Fund” that Trump promoted to donors — was the biggest beneficiary of those post-election campaign donations.

In fact, Wick indicated, there was no evidence that the election defense fund ever existed.

One former campaign staffer told investigators in one clip that she didn’t believe there “is actually a fund called the Election Defense Fund.” Another aide described it as a campaign marketing tactic in the video.

But the former President’s political action committee has sent $1 million to the nonprofit where former White House chief of staff Mark Meadows is now a top official and another $1 million to the America First Policy Institute, home to several former Trump administration officials. Some $5 million went to the company that ran the January 6, 2021, rally on the Ellipse.

The House committee, however, didn’t show much detail about what, if any, previously undisclosed financial documents it has obtained so far in its probe.

Asked after the hearing by CNN whether Trump broke the law, Lofgren said: “It’s clear that he intentionally misled his donors, asked them to donate to a fund that didn’t exist and used the money raised for something other than what is said.”

“Now, it’s for someone else to decide whether that’s criminal or not,” she added.