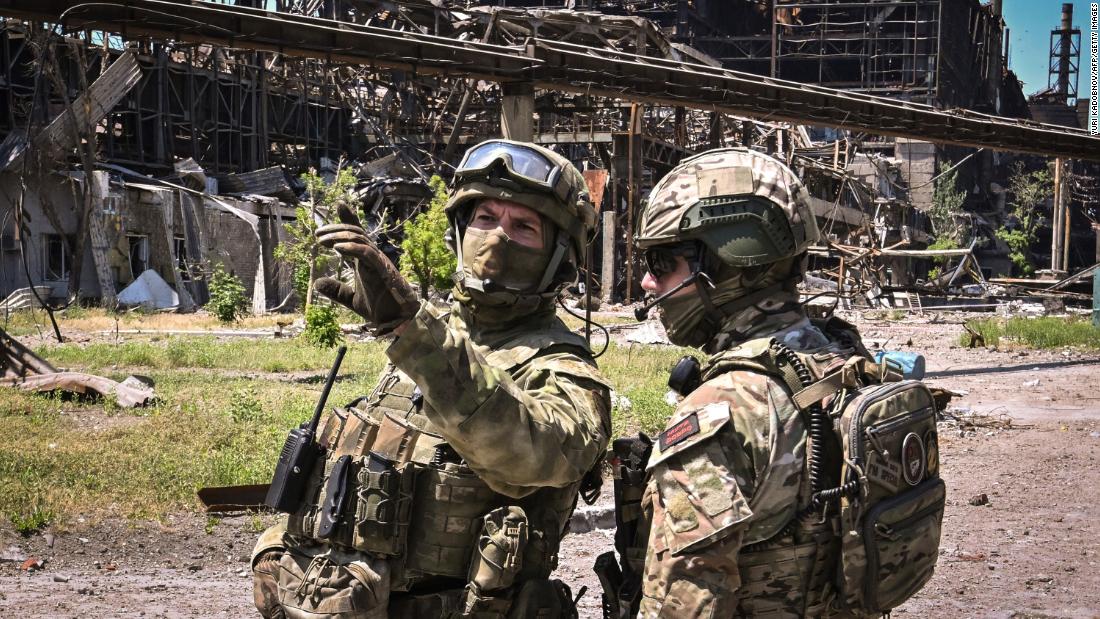 Hundreds of civilians continue to shelter at a chemical plant in the besieged Ukrainian city of Severodonetsk, as Russia advances a questionable claim to have opened a so-called “humanitarian corridor” for Ukrainians to evacuate into Russian-held territory.

The Russian Ministry of Defense on Tuesday said that it would open a route for civilians to move from the Ukrainian-held Azot chemical plant, starting at Wednesday at 8 a.m. Moscow time (7 a.m. local in Severodonetsk).

Just over 500 civilians are still sheltering beneath that industrial facility, according to Oleksandr Striuk, head of the Severodonetsk military administration. Authorities say it has come under sustained Russian bombardment, and the regional leader said Wednesday that “the Russians are close.”

It is unclear whether any Ukrainians will leave for Russian-held territory, or even whether a workable evacuation corridor exists. Given Russia’s past practice, Ukrainian officials have generally been skeptical of such claims, saying that Russian forces have repeatedly broken promises to open evacuation corridors, driven civilian evacuees onto their territory and failed to observe ceasefire agreements.

Ukrainian authorities have not commented on Russia’s proposal, and such a corridor is much less tenable without a two-sided ceasefire.

The Russian MOD did not mention the corridor in its Wednesday update on the war, but publicized its proposal after it claimed Ukraine asked for a corridor from the Azot plant to Lysychansk, to the west, which is held by Ukraine.

“We consider the appeal by the Ukrainian side for the alleged rescue of civilians to be an attempt to withdraw the surrounded surviving units,” the Russian MOD said. “Thus, there are all signs of a repeat of Mariupol scenario.”

Instead, the Russian MOD called on Ukrainian fighters to “lay down their arms” and promised to treat them as prisoners of war, “as has already happened to your comrades who previously surrendered in Mariupol.”

“We call on the official authorities in [Kyiv] to show prudence and give appropriate instructions to the militants to stop their senseless resistance and withdraw from the territory of Azot plant,” the MOD said.

The difference with Mariupol is that unlike the Azovstal plant, which was entirely surrounded by Russian forces, the Ukrainians still appear able to move in and out of the territory they control in Severodonetsk.

All three main bridges between Severodonetsk and Lysychansk across the Siverskyi Donets River are now impassable.

But Serhiy Hayday, head of the Luhansk region military administration, said Monday that moving back and forth to Severodonetsk was “difficult, but not impossible.”

Ukrainian authorities said Tuesday that evacuations were slow because of the constant bombardment, but still possible.