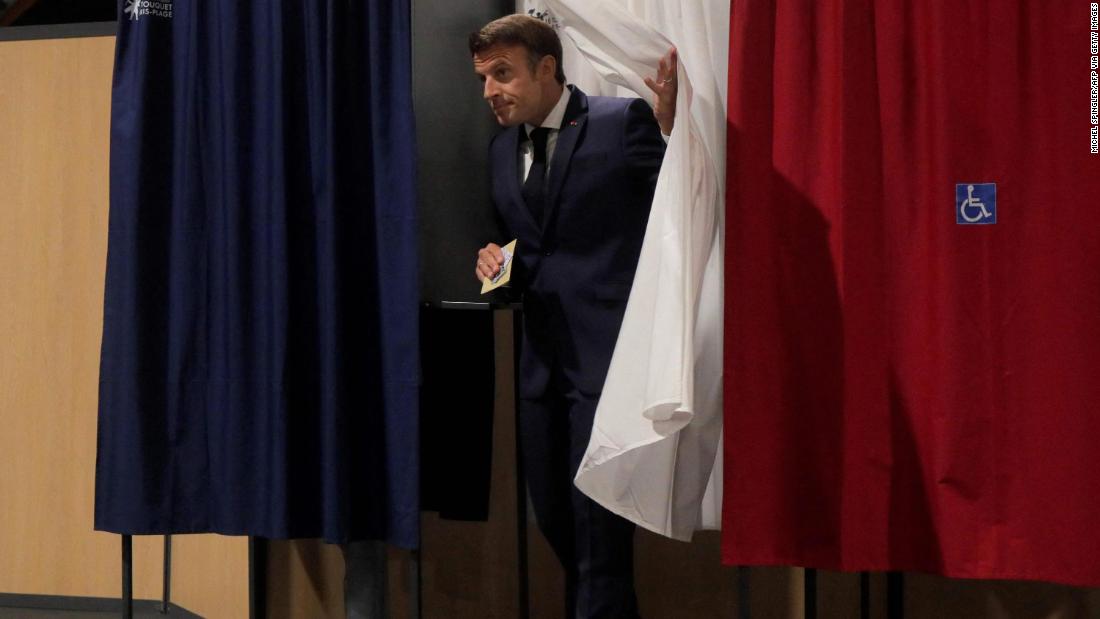 Partial results released by France’s interior ministry on Sunday showed Macron’s centrist alliance Ensemble! likely to miss the threshold for an absolute majority — 289 seats in the National Assembly, France’s lower house — though it will remain the largest parliamentary bloc.

Leftist coalition New Ecological and Social People’s Union (NUPES), led by far-left figure Jean-Luc Mélenchon, is set to come in second place and is projected to win 30.34% of the votes, according to the interior ministry’s partial results.

NUPES would then become the main opposition force in the country, but the coalition is expected to be divided on some issues once in parliament.

“It is a totally unexpected situation, absolutely unheard of,” said Mélenchon shortly after partial results were released.

“The collapse of the presidential party is total, and no majority is presented. We have achieved the political objective that we had set ourselves, in less than a month, to bring down the one who, with such arrogance, had twisted the arm of the whole country, who had been elected without knowing what for,” he said.

Macron will become the first sitting president to not win a parliamentary majority since a 2000 electoral reform. His coalition is expected to try and form alliances with other political parties, including reaching out to the traditional right which came fourth on Sunday.

“This is an unprecedent situation, and carries a risk for our country,” said French Prime Minister Élisabeth Borne on Sunday. “As of tomorrow, we will work on building an action-oriented majority, there is no alternative to that coalition to guarantee our country stability and enact the necessary reforms.”

Marine Le Pen’s far-right National Rally party is meanwhile set to come in third place with 18.92% according to the partial interior ministry results.

“This group will be by far the largest in our political history,” said Marine Le Pen, the party leader who was also re-elected as MP, “we are going to continue bringing together the French people within a great popular movement, unifying the patriots on the right and left, to start the recovery that France needs.”

Just like in the first round of the election earlier in June, the vote on Sunday was marked by a low voter turnout, with an abstention of about 53%, according to the interior ministry.

Macron won a second term in presidential elections in April. The president — who is seeking to raise the retirement age, pursue a pro-business agenda and further European Union integration — now enters an unknown territory of negotiation and compromise, after five years of undisputed control.