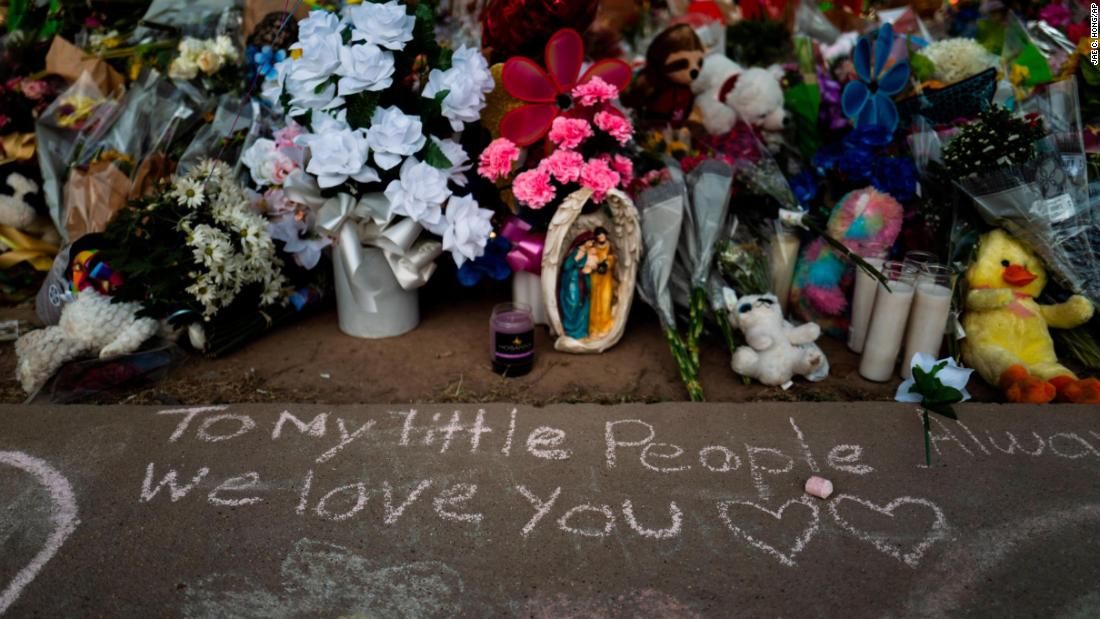 The Robb School Memorial Fund was established to help those affected by last month’s mass shooting that killed 19 students and two teachers.
As of Friday, $11.5 million have been donated to the fund, which is run through a partnership with the First State Bank of Uvalde and the Austin-based nonprofit OneStar Foundation, according to the city.

“Funds are continually being received by generous and compassionate individuals, businesses, and organizations from across Texas, the nation, and the world,” Uvalde Mayor Don McLaughlin said.

A steering committee comprised of residents will decide in the coming weeks how the money will be distributed and used, city officials said, adding that a “transparent program protocol” will be presented to the public.

As families mourn the loss of loved ones and survivors struggle to make sense of their trauma, officials have faced intense scrutiny over how law enforcement initially responded to the deadliest school shooting in the US in nearly a decade.
Pedro “Pete” Arredondo, the Uvalde school police chief identified by other officials as the incident commander on scene, recently gave his first extensive public comments in an interview with the Texas Tribune.
Speaking to the outlet by phone, written answers, and in statements provided by his attorney, George E. Hyde, Arredondo said that he didn’t consider himself the incident commander and did not instruct officers to refrain from breaching the scene.

“I didn’t issue any orders,” Arredondo told the Tribune, which noted that the chief instructed officers to start breaking the outside windows of other classrooms and begin evacuating students. “I called for assistance and asked for an extraction tool to open the door” of one of the classrooms where the shooting happened, he said.

The gunman was in adjoining classrooms with students and teachers for more than an hour until police were able to open the locked door with a key from a janitor, according to a timeline released by the Texas Department of Public Safety.
As those critical moments elapsed, some children were still alive and calling 911 for help; one survivor told CNN she smeared herself with her friend’s blood and played dead.

During that time, Arredondo “assumed that some other officer or official had taken control of the larger response,” the Tribune reported. “He took on the role of a front-line responder.”

Hyde told CNN in a text message Friday that neither him nor Arredondo would speak further at this time.

“My client needs some time as this has been very difficult for him. At this point we will not be granting any interviews immediately,” Hyde said.

CNN has also reached out to Texas DPS and the Uvalde Consolidated Independent School District for comment, as well as The National Incident Management System, which guides all levels of government on how to respond to mass emergency events.

On Thursday, the Texas House investigative committee held its first hearing in its probe into the Robb Elementary shooting.

The panel may release its preliminary findings before the full probe is complete, Republican state Rep. Dustin Burrows, the committee chairman, said in the panel’s opening remarks. The preliminary report is expected to be complete by the end of the month, a source close to the committee told CNN.

Burrows, along with the two other committee members — Moody and former Texas Supreme Court Justice Eva Guzman — heard private testimony from top Texas Department of Public Safety officials Thursday, including from McCraw, according to a witness list provided by the committee.

The committee’s first hearing was held Thursday, and no decisions were made, according to the committee chairman Dustin Burrows, who declined to provide details on the proceedings.

State Rep. Joe Moody also declined to speak about specifics of the hearing.

When asked by CNN about how it felt to review the evidence surrounding the shooting, Moody said, “Like every other parent in this state, I’m sad. I’m scared. I’m shocked.”

The committee will meet again June 16 and 17 in Uvalde to hear from witnesses behind closed doors.

The hearings’ public notice does not specify who the witnesses are. Instead, it noted that the committee will “hear invited testimony from law enforcement authorities and other affected parties related to” the shooting.