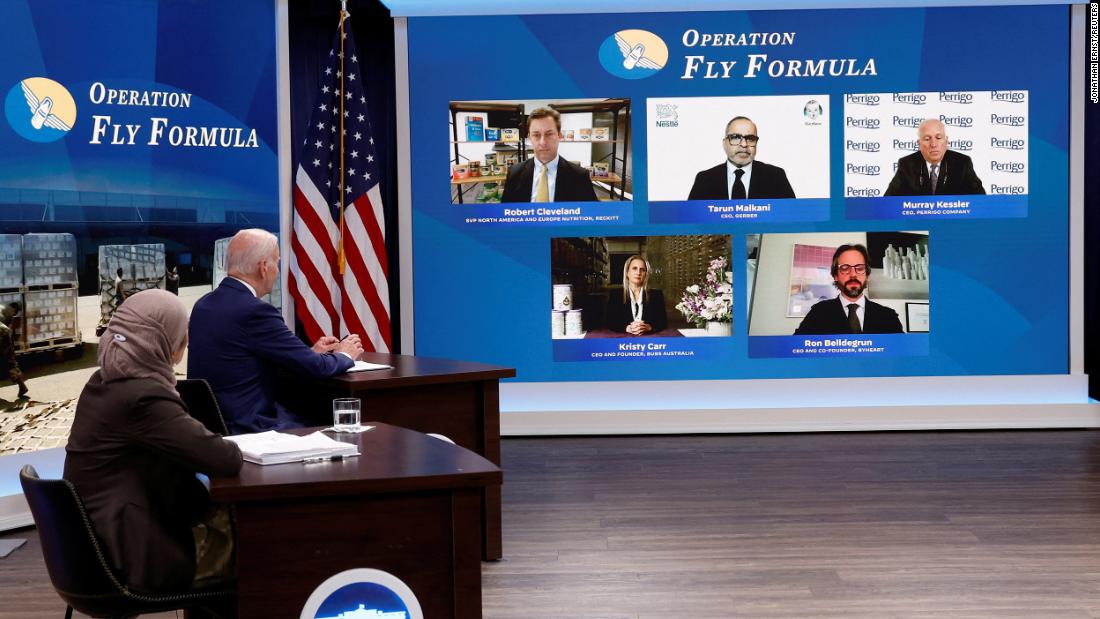 Around that time, officials with the FDA held a briefing with White House staff to discuss the situation as an Abbott plant in Sturgis, Michigan, was still shuttered and continued to be plagued with problems. In that meeting, the details of which are previously unreported, FDA officials focused on the ongoing problems at the closed facility — including why it remained so difficult to bring it back online — using highly technical language. Given that Abbott controlled around 40% of the formula market, the closure of the plant spelled serious trouble ahead.

Notably missing from the agency’s presentation that day, according to sources familiar with the discussion, was an emphasis on just how deeply Abbott’s troubles might wreak havoc on the national supply chain of baby formula.

“In early May is when we start really trying to roll up our sleeves and figure out what’s going on here,” recalled one senior administration official in an interview with CNN. “This was a moment when I think a lot of people in all those kinds of conversations were saying: ‘We all think we should be doing a few more things now.'”

New details on the administration’s initial handling of the formula crisis could be crucial to understanding any future actions it takes to alleviate the shortage, particularly given that the Abbott plant in Michigan recently announced it was halting production again after severe flooding.

Interviews with current and former administration officials including about that FDA-White House meeting in May offer insight into two questions that have haunted the Biden administration: Why the White House did not step in with emergency actions of its own until the formula shortage appeared to have become a full-blown crisis and why President Joe Biden was not informed of the gravity of the situation until months after the Abbott plant’s closure. Former FDA employees also painted a picture of deep-seated problems at the agency that may have hampered its grasp of a potential formula shortage headed its way, as well as the speed of the administration’s response.

Within a few weeks of the mid-spring discussion between FDA and White House officials, Biden would invoke the Defense Production Act to speed up formula production at home and announce multiple flights to bring in large quantities of baby food from abroad. He would also hold meetings with executives of major retailers and formula manufacturers.

But for parents and caregivers across the country, those actions in May appeared to come much too late.

By that time, the domino effect triggered by the shuttering of the Michigan Abbott plant was coming into sharper focus for consumers with each passing day, as parents and caregivers scrambled to procure baby food. Criticism and questions about the Biden administration’s handling of the situation were also growing louder.

On June 1, Biden convened a virtual meeting at the White House with senior executives of baby formula manufacturers. They told the President more than once that that as soon as the Abbott recalls were announced in February, they knew they had a serious problem on their hands.

The President then made a striking admission: Unlike those executives, he did not become aware of the gravity of the formula shortage until months after the Abbott recalls.

“They did, but I didn’t,” Biden said. “I became aware of this problem sometime in — after April — in early April, about how intense it was.”

The President added: “So, we did everything in our power from that point on, and that’s all I can tell you right now.

Those comments raised fresh questions about the federal government’s handling of the formula problem, particularly given that White House officials had repeatedly insisted that the administration had been working around the clock since February to address the situation.

When problems with the Abbott Michigan came into full public view in February, the administration began to track the national in-stock rate of baby formula as well as sales data, sources familiar told CNN.

This is what they saw in those trends: In March, there was a significant drop in availability of formula on store shelves, suggesting that many items were out of stock. But that appeared to stabilize in the month of April, which officials took to mean that the initial round of actions taken by the FDA and USDA to ramp up formula production and relax rules around which formula families were allowed to purchase through a federal nutrition program were starting to help.

But in May, the in-stock rate started to go down again.

Meanwhile, the sales data that the administration was tracking told a different story: Baby formula purchases remained largely on par with levels from the previous year through March and April. Officials took that to mean that in those months, families were still able to get their hands on the formula they needed, even if certain products might have been missing from store shelves. Those products were likely selling out fast, however, and not sitting on store shelves long before they were snatched up.

But that, too, started to change in May, with the administration seeing a notable uptick in sales levels.

“You just see all of a sudden an elevated buying pattern emerge the first two weeks of May, which is where we all start realizing something new is happening in the market and start to suspect that there is all of a sudden a demand shock that has hit,” the senior administration official said.

The confluence of shelf availability taking a dip and sales numbers moving up was a bright red flag, the official noted: “We wanted to get ahead of what we were worried about could be a new strain being added to the supply chain at that moment.”

That fresh concern in May could help explain why Biden said he was not informed of the seriousness of the formula shortage until sometime “after April.” White House press secretary Karine Jean-Pierre has deflected numerous questions from reporters about why he wasn’t informed until then and which of his advisers ultimately filled him in.

“The FDA has been a vital partner in the President’s goal of accelerating the availability of safe infant formula, but ultimately, it is going to be up to Abbott to end this shortage,” a White House official said in a statement to CNN.

Still, the FDA has come under fire for not acting fast enough once problems were identified at the Abbott plant.

Part of the reason for that, former FDA officials told CNN, is the lack of resources and data provided to the FDA arm that tracks food.

The FDA has oversight over food and drugs, but former officials said food surveillance is less sophisticated at the agency than on the drug side, and that the agency simply is not equipped to project potential food shortages. Importantly, infant formula falls under food.

In the event of a potential shutdown of a plant manufacturing drugs, for example, the FDA has authorities that allow it to understand the supply chain ramifications and as a result, possible issues that might arise related to accessing specific drugs if a facility is shuttered, the former officials said.

The FDA has asked Congress to expand those authorities, dating back to 2020 when the agency has sought to have a better grasp of supply chain issues.

“We have almost no authority now other than to review the products as they come in,” Califf told lawmakers.

“There’s no requirement now that firms notify us when they have an impending shortage. There’s no requirement that if they find a contaminant in a sample in their facility that has not yet been shipped out that they need to let us know, ” Califf said, pointing out that Abbott had detected cronobacter in samples of its formula, but did not tell the agency.

The FDA launched a review of its actions leading up to the shortage but in a statement to CNN, maintained that the agency kept federal partners appropriately informed throughout the year.

“The FDA has been working to address the infant formula supply chain issues both before and after the recall and has kept our federal partners such as USDA, HHS and the White House informed of our concerns and efforts to mitigate those challenges throughout that time,” an FDA spokesperson said.

“These interactions included clearly communicating our concerns about infant formula supply chain issues associated with the pandemic and the wide-reaching impact the recall and shutdown of a facility from the largest U.S. formula provider would have on the market,” the spokesperson added.

The Michigan plant reopened June 4, after a federal judge signed off on an agreement between the FDA and Abbott.

But last week, the company stopped formula production again after severe storms led to flooding in the city, including inside the plant.

“It is disappointing,” Jean-Pierre said when asked about the latest setback. “What we can do is continue to focus on what we’re going to do which is ramping up production, increasing supply and making sure that American families only have access to safe formula. That is the focus for us. That is what we control.”