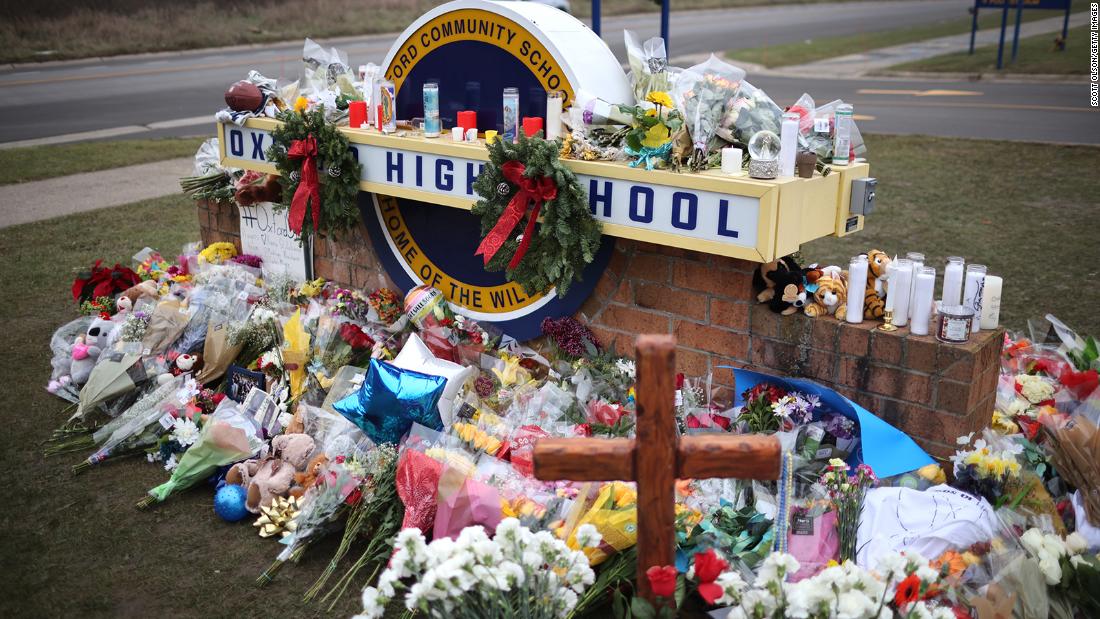 The students — who were present during the shooting — seek to obtain a transparent third-party investigation into the Oxford Community School District’s lack of action regarding the events and warning signs leading up to the shooting.

Their complaint in the suit filed Friday alleges school officials acted with “deliberate indifference” that contributed to the fatal attack.

The students’ lawsuit alleges that on November 30, 2021, school officials released “John Doe” from the safe confinement of the counseling office following alarming behavior and a meeting with his parents and “compounded the danger to all students.”

Students continue to “suffer irreparable harm” in the aftermath of the shooting, the lawsuit claims.

Ethan Crumbley, who was a 15-year-old student at the school at the time, is charged with opening fire at Oxford High School on that day, killing four students.
Since then, Crumbley has pleaded not guilty to charges including four counts of first-degree murder, seven counts of assault with intent to murder, and 12 counts of possession of a firearm during the commission of a felony.
His parents, Jennifer and James Crumbley, have each been charged with four counts of involuntary manslaughter. They have pleaded not guilty.

Prosecutors have said that James Crumbley bought the gun just days before the shooting at an Oxford store with his son.

Ethan Crumbley’s actions in the days leading up to the shooting raised red flags, prosecutors have said, including a drawing on his desk that showed a “semiautomatic handgun pointing at the words ‘the thoughts won’t stop help me,'” Karen McDonald, the Oakland County prosecutor who is leading the case, said after the shooting.

The illustration included a drawing of a bullet with the words “blood everywhere” written above it, The words “my life is useless” and “the world is dead” were also written on the drawing, McDonald said.

The picture led school officials to hold a meeting with the accused shooter and his parents on the day of the shooting. The parents were instructed to help provide counseling for their son within 48 hours.

The parents resisted the idea of taking their son out of school, McDonald said, and he was allowed to return to the classroom.

During that meeting, Ethan Crumbley had the gun in his backpack, which was not searched, McDonald said.

In a statement to the community days after the shooting, superintendent Tim Throne said regarding the meeting, “Given the fact that the child had no prior disciplinary infractions, the decision was made he would be returned to the classroom rather than sent home to an empty house.”

In addition to an investigation, the students in their suit also call for school safety policies to be implemented prior to the start of the upcoming academic year, with full transparency and proper training in areas such as conducting searches of backpacks and handling students who appear to pose a risk to themselves and others.

CNN has reached out to the students’ attorneys, as well as school officials, for comment.

“This lawsuit will hopefully result in common sense policy changes so that no parent or child or community ever has to feel as helpless as Oxford has coming out of this situation,” said Ashley Ross, member of the Oxford Village Council.