Opinion: I was badly injured on the front lines of the attack on the Capitol. Don't tell me January 6 didn't happen 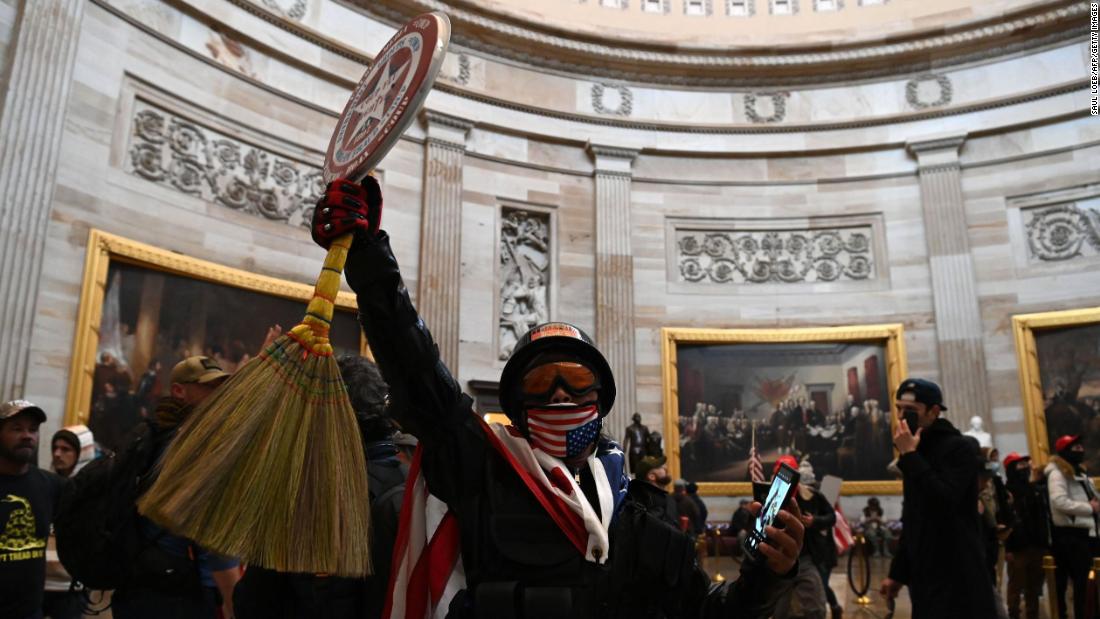 Her testimony was the emotional core of a dramatic day that also featured a chilling, documentary-style film that captured the storming of the Capitol. For those of us in law enforcement who put our bodies on the line defending the pillar of American democracy, watching the harrowing footage and hearing Edwards recount the events of January 6 meant reliving an unspeakable nightmare.
Her descriptions of the mayhem she confronted on January 6 were not just dramatic; they were horrific. The protest was bloody and unspeakably violent. Scores of officers were grievously injured. One Capitol Police officer lost his life after suffering a stroke following the assault on the Capitol. Four other officers were so emotionally devastated after hours of brutal hand-to-hand combat against the rioters that they took their own lives.

I was in the hearing room during Edwards’ testimony, and like millions of people watching the hearing on television screens across the country, I hung on to her every word.

She described slipping in the blood of her colleagues as police fell all around her. Her haunting words described the “war scene” at the Capitol that day: “There were officers on the ground. They were bleeding. They were throwing up. I saw friends with blood all over their faces.”
And yet inexplicably, there are conspiracy theorists — including current and former officials in government and prominent members of the media — who maintain that January 6 did not happen, or that the violence experienced by those of us on the front lines was greatly exaggerated.
I’m no longer a cop, but I spilled my fair share of blood that day and almost lost my life defending our democracy. Don’t tell me January 6 didn’t happen. I was there. I have the scars — visible and those that can’t be readily seen — to prove it.

So, hasn’t the country already heard all this? Does America really need another recounting of the almost medieval combat that officers on the front lines of the fighting endured? The answer is absolutely yes.

It’s important that Americans see the hell depicted in the video footage to have a hint of an understanding of what law enforcement endured at the Capitol that day. It’s imperative that the country see how valiantly we fought to save our system of government. And it’s vital that the public understand just how close the country came to losing its democracy.

If the police hadn’t succeeded in holding back the protesters for as long as we did, giving our lawmakers and congressional workers the opportunity to get to safety, we might be led today by a very different — and illegitimate — government.

So many people have a vested interest in believing the lies being spouted about January 6. But if members of the public pay attention, they’ll hear the committee lay out the truth. They’ll hear the truth about the origins of the violence on January 6 and the role our political leaders and their subordinates played in the violence that day. And they’ll learn about the central role played by then-President Donald Trump in trying to overturn a free and fair election.

It’s been more than a year since January 6, 2021, and while the awful events of that day are etched in my memory, they might be vague in the public’s awareness. It was important for the select committee to take the American people back to the day of the insurrection and hear firsthand testimony from an officer on the outermost perimeter, who experienced the violence at the outset of that terrible event. And I think it’s important that the public and our lawmakers hear from as many officers and former police that were there on the ground that day as possible.

My recollection of the horrific events of that day is not much different from Edwards’. Like her, I was seriously injured fighting the throngs of heavily armed protesters at the Capitol. I suffered a concussion, was attacked with my own Taser and went into cardiac arrest. I consider myself lucky to be alive.

I know from my own past testimony on Capitol Hill in the aftermath of January 6 just how hard it must have been for her to appear before the committee. I’m proud of her for finding the courage to do it.

But to be perfectly honest, I also understand there are broad sections of the public whose hearts cannot be changed. They refuse to accept even the moving testimony and the compelling video footage shown during the hearing that provided incontrovertible evidence of the horrors police faced that day. They fail to understand that the attack on our democracy was serious, significant and is ongoing.

What I’m really hoping at this point is that the Department of Justice is taking note. Those who sought to overthrow our democracy should be held accountable, and the select committee is methodically laying out the road map to bring them to justice.

I’m extremely proud of Caroline Edwards for her valor on January 6. She was a warrior. And I’m also proud of her courage in testifying before the committee. My concerns are that her experience will in any way resemble my own — being ostracized by current and former brothers and sisters who wear the badge. I hope that the law enforcement community knows how lucky it is to have her among its ranks.
I paid a high price for January 6. But perhaps what hurt me more than even the grievous injuries I suffered is that I lost a law enforcement career that I loved. The curses and epithets hurled at me by protesters at the Capitol pale in comparison to what I experienced from coworkers and colleagues in my own department and from Americans across the country. I’ve never received a worse insult than being called a disgrace to the badge by fellow officers. That’s the same sort of shameful treatment that other officers who defended the Capitol on January 6 have been subjected to as well.

And I think that the US Capitol Police leadership owes it to its officers and to the agencies that responded that day to assist to be transparent in their failures and also to show accountability.

At this point our country is so polarized, with people entrenched on their respective sides of the political aisle, that I can’t be sure how much the January 6 committee’s critically important work will break through. The hearings resume on Monday, and there will certainly be more gut-wrenching testimony.

Accountability for the treachery of January 6 rests mostly at the very pinnacle of our government. And the American public is not the only audience that the select committee is addressing in these hearings.