Opinion: What gives DeSantis an edge over Trump 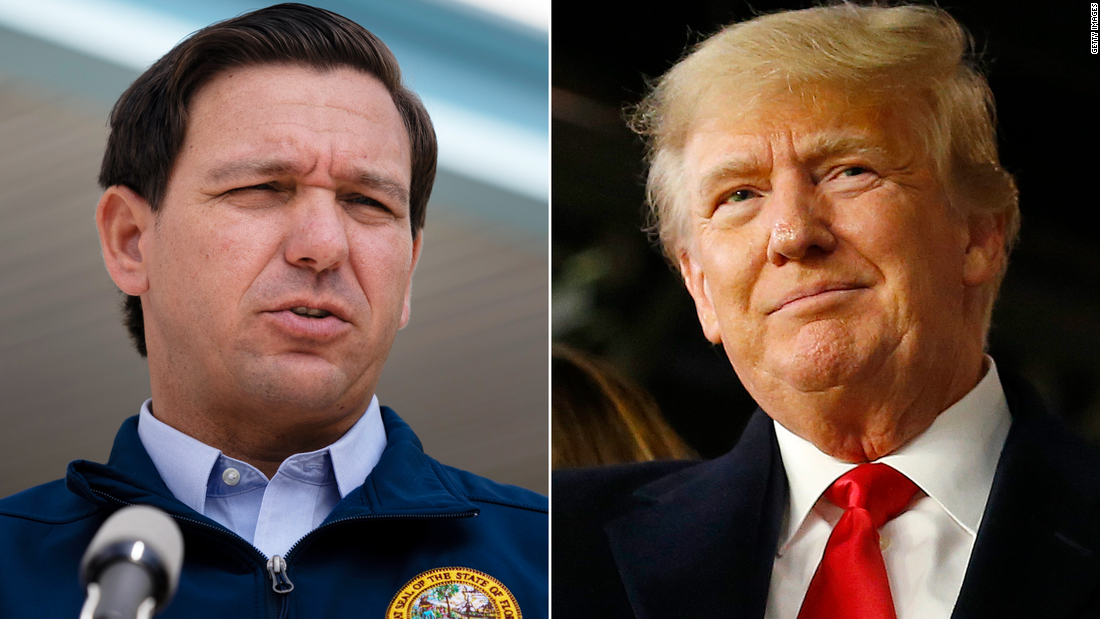 While most observers would probably say yes, other candidates have emerged who are threatening to steal the spotlight and offer a new and improved version of Trumpism. Few politicians have garnered as much attention as Florida Gov. Ron DeSantis. The governor, who has recently been featured in magazines such as The New Yorker, is currently considered the most serious threat to a Trump reelection bid.
In a new poll conducted by the University of New Hampshire, DeSantis comes out on top among likely GOP primary voters in the Granite State at 39%, with Trump at 37%.
To top it off, DeSantis is not planning to seek Trump’s endorsement for his reelection campaign as governor, according to a Politico report, fueling speculation that he could be gearing up to run against the former president for the Republican presidential nomination in 2024.
There is good reason for Trump to be worried. When it comes to both policy and rhetoric, DeSantis can fit comfortably within the orbit of the modern GOP, having promoted some of the core themes and talking points that came to the surface during the Trump presidency. During the pandemic, for example, DeSantis was at the center of the fight that emerged around Covid-19 precautions, and he signed a bill into law that prevented organizations from imposing vaccine mandates.
The governor has also pushed for stringent immigration policies, sought to deregulate businesses, railed against “critical race theory” and signed a bill to prevent certain instruction about sexual orientation and gender in classrooms.

Many Republicans liked the fighting, anti-establishment mentality that Trump brought to the White House. But DeSantis has an aggressive posture to match, and his governing style meshes well with the combative attitude of the Republican electorate.

So what might give DeSantis an edge over Trump among Republican voters?

The Florida governor, who was educated at Yale and Harvard Law School, has displayed a grasp of public policy and governance that Trump has never shown. As Dexter Filkins writes in the New Yorker, “Both men claim to channel the rage of an electorate that feels sneered at and dismissed by liberal institutions. But while Trump, with his lazy, Barnumesque persona, projects a fundamental lack of seriousness, DeSantis has an intense work ethic, a formidable intelligence, and granular understanding of policy.” Though many Trump supporters dismiss the importance of expertise, there would still be great political appeal to a tough, right-wing conservative who can also joust on the details of policy.

If DeSantis runs, he will do so with much more government experience under his belt than Trump had in 2016. After serving as governor, as well as a US House Representative, DeSantis will give Republican voters an opportunity to support a candidate who is red to the core, with decorum and experience to boot. It also helps that as a governor, he can still position himself as an outsider to Washington. And if DeSantis faces off against Trump in the Republican primary, the Florida governor will inevitably paint the former President as part of the establishment.

Trump, of course, is weighed down by his own baggage. The devastating findings of the House select committee on January 6 could help DeSantis. While there are certainly Republicans who will see the committee’s investigation as a witch-hunt, others in the party who recognize the ugliness of the US Capitol attack might prefer a candidate who isn’t, as far as we know, directly associated with the attempt to overturn the election.

The governor is also drawing support from a number of quarters. Many figures in Rupert Murdoch’s conservative media empire are starting to tout DeSantis as a smarter alternative in 2024 than Trump. Meanwhile, Politico reported that DeSantis is securing financial support from some of Trump’s biggest donors.

And his timing might be just right. Although DeSantis was pilloried by the national press for rejecting vaccine mandates, lockdowns, and school closures, the nation has now entered a period of the pandemic where more and more Americans are willing to live with the risks of the virus. In this context, some of the governor’s more radical decisions — which came before the vaccines were widely available — could now appear less so.

Of course, Trump could burst the DeSantis bubble if he officially announces his reelection bid. Trump is likely to command so much media attention and generate such electoral fervor that DeSantis might quickly find himself sitting on the sidelines. Recent SCOTUS decisions, including the one knocking down New York state’s gun regulation law, will remind Republican voters of what Trump delivered while in office.

Many up-and-coming governors — like former Texas Gov. Rick Perry in 2012, for example — are discussed as exciting presidential prospects, only to completely fizzle out as the race unfolds and their vulnerabilities become painfully clear under the national spotlight.

For now, Trump likely understands that the governor of Florida is a major political threat. DeSantis might just be the Republican who can present a cleaned-up version of Trumpism and mount a strong challenge in 2024.