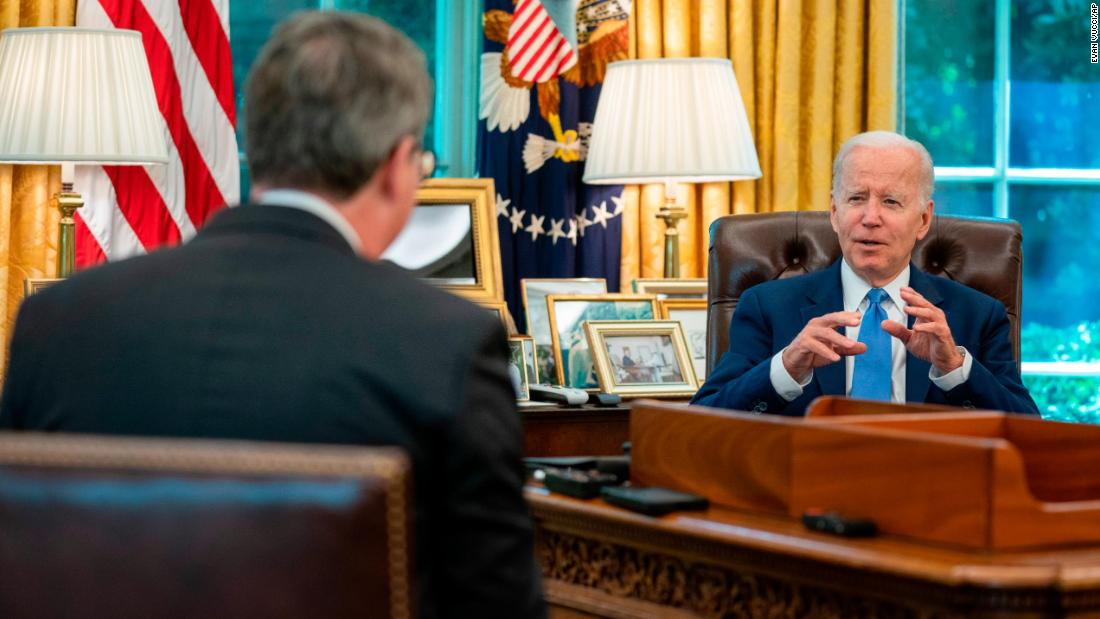 >> When Boak said “Republicans right now are saying to voters that inflation started with your COVID relief package,” Biden said, “zero evidence of that.” He also said “the idea that it caused inflation is bizarre.” (In this detailed CNN Business story, Allison Morrow said “it’s true that government spending boosts inflation,” but noted that it’s complicated and many other factors are involved.)
>> Boak’s main story after the interview led with this Biden quote: “People are really, really down. They’re really down.” He said it in the context of Covid-19. He said he thinks people “vastly underestimate” the impact of school closures and other Covid disruptions. “Think about it across the board,” he said. “How isolated we’ve become. How separated we’ve become.”

>> Biden cited “overwhelming evidence” about the pandemic’s impacts “on the psyche,” including the deaths of so many people. “So you’re talking about a country that has undergone profound psychological trauma,” Boak said. “Yes,” Biden answered. “What can you as a president do,” Boak began to ask, “to address that psychology,” and Biden answered mid-sentence: “Be confident.”

>> Biden also touched on the nation’s psyche while invoking climate change: “You got the tundra melting. We’ve got the North Pole, I mean, so people are looking and I think it’s totally understandable that they are worried because they look around and see, ‘My god, everything is changing.’ We have more hurricanes and tornadoes, flooding.” Then he brought up Yellowstone.

>> The president alluded to his media diet a few times. He mentioned early pandemic era videos of cars lining up for food donations. He said the “MAGA party” tries “to make me out to be this socialist.” And he cited a positive article, apparently on his desk, from The New York Times Magazine.

>> Donald Trump on the mind? The funniest part of the transcript is when Biden called Boak a “young man;” Boak said “I feel like I’m getting more gray hair every day, sir;” and Biden said “Well, I tell you what, at least you’re keeping it. I’d settle for orange if I had more hair.”

>> Biden brought up the impending SCOTUS ruling about abortion on his own, and then he circled back to it later, too: “Even people who are not pro-choice are going to find it really, really off the wall when a woman goes across the state lines and she gets arrested for where she’s going.”

>> At the very end, as Biden lambasted Republicans for being “out of the mainstream of where the public is,” he said, “I knew I was stepping into a difficult moment, but — Can I say something off the record?” So it’s anyone’s guess what he said then. Read the rest of the transcript here…

Thursday marked The AP’s first Biden interview of his presidency. (Many other major American news outlets still haven’t had one.) Reporters referred to the Q&A as “rare” and barely concealed their hopes that he’ll speak more often.
When I inquired with the White House about what the interview said about Biden’s broader media strategy, I didn’t hear anything definitive. CNN’s Edward-Isaac Dovere wrote earlier this month about the administration’s messaging struggles. Biden complimented Boak during the sit-down, saying “I’m impressed by your objectivity, how you write,” so perhaps the president’s readership led to the interview. I’ll ask AP exec editor Julie Pace when she joins me on Sunday’s “Reliable Sources…”

— “Joe Biden should not run for reelection in 2024. He is too old.” That’s the beginning of Mark Leibovich’s latest piece for The Atlantic. Read the rest and see if you’re persuaded… (Atlantic)
— Interesting framing: Bidenworld believes “we won the Covid battle, lost the political war,” Adam Cancryn writes, as “the nation has moved on to abortion, inflation and guns…” (Politico)
— Max Tani and Alex Thompson describe how the White House is working “behind the scenes to get more of its perspective on Fox’s website…” (Politico)
— Friday is the 50th anniversary of the Watergate break-in. The Washington Post has a special online section full of coverage… (WaPo)
— It’s the differences between then and now, not the similarities, that stand out most. As former publisher Donald E. Graham wrote in this retrospective, had the “fake news” phrase been around in 1972, “Nixon’s folks would have gratefully used it…” (WaPo)
— James Hamblin quipped Thursday: “The Jan. 6 hearings are like Watergate but if dozens of staff testified that the president told them to break into the Watergate … then publicly shamed his vice president for not breaking into the Watergate … then continued to insist that breaking into the Watergate is very good…” (Twitter)
A version of this article first appeared in the “Reliable Sources” newsletter. You can sign up for free right here.