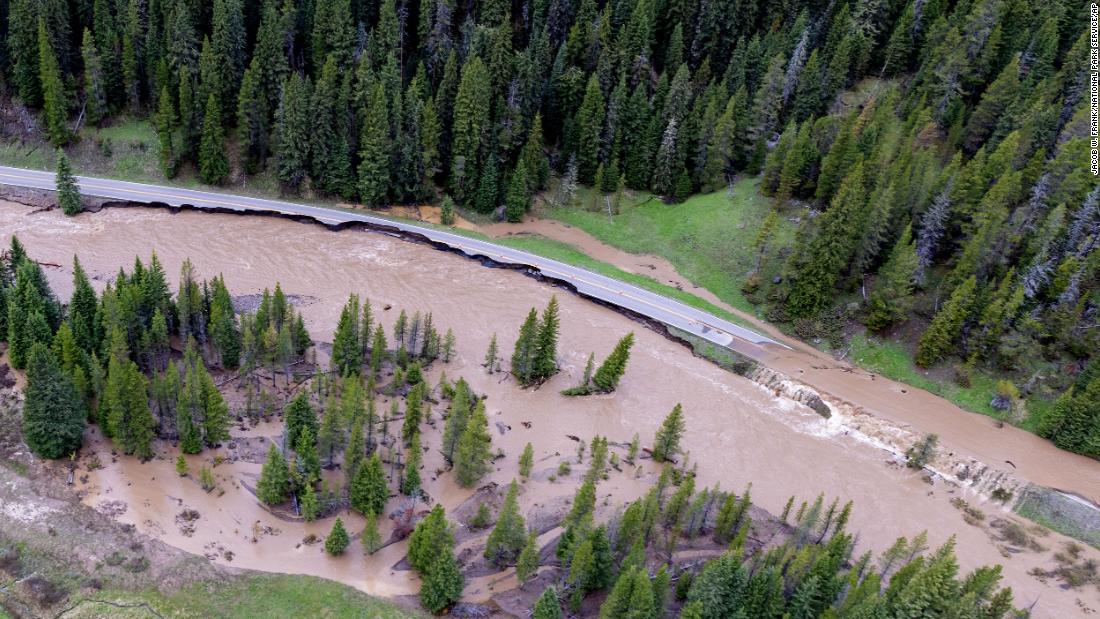 Abnormally warm temperatures and torrential rain triggered a wave of snowmelt over the weekend which produced nearly a foot of water runoff by Monday.

The Beartooth and Absaroka mountain ranges “received anywhere from 0.8 inches to over 5 inches of rainfall” from June 10 to June 13, the National Weather Service in Billings revealed Tuesday.

The extreme rainfall combined with snowmelt led to a massive deluge of water equivalent to the area receiving two to three months worth of summer precipitation in just three days, according to CNN Weather calculations.

The enormous volume of water then flowed into the rivers and valleys in lower elevations, where it quickly rose to record depths and led to “flooding rarely or never seen before,” forecasters at the National Weather Service said.

The Yellowstone River, which runs through the park and several Park County cities, reached 13.88 feet at Corwin Springs Monday afternoon, surpassing the historical high crest of 11.5 feet from 1918, according to NOAA.

Scientists predicted events like this week’s flash flooding would happen more often in the Yellowstone area as global temperatures climb. A report published just last year on the future of Yellowstone concluded the climate crisis would lead to more rainfall and rapid snowmelt due to extreme spring and summer warmth.

In the report published last year, scientists with the US Geological Survey, Montana State University and the University of Wyoming examined how the climate has changed from 1950 to 2018, and how it would continue until the end of the century based on projected greenhouse gas scenarios from the UN Intergovernmental Panel on Climate Change.

The report showed average temperatures in the Greater Yellowstone Area rose by 2.3 degrees Fahrenheit since 1950, and could increase another five to 10 degrees in the coming decades.

Under the climate scenario where significant reductions to greenhouse gas emissions are made in the next few years, scientists found annual precipitation in the region could still increase by 9% to 15%, though high temperatures and evaporation rates would still likely worsen the region’s drought conditions.

It suggests the Yellowstone region will experience what the rest of the West is already experiencing: long periods of dry conditions punctuated by brief moments of torrential rainfall, which leads to dangerous flash flooding.

Studies have shown how climate change could produce larger and more intense rain events, leading to more flash floods like the Montana and Wyoming are facing right now.

Though cooler temperatures and drier weather have allowed for rivers and streams in the Yellowstone region to drop back to normal levels, even hotter temperatures are expected late this week and weekend, which could lead to more melting, and bring additional flooding to the region.

“Plan on highs in the 60 to 70s in the higher elevations [Friday and Saturday], which should melt much of the remaining snowpack and lead to additional river rises,” the National Weather Service in Billings said Tuesday.