The biggest bridal trend in 2022? Whatever you please 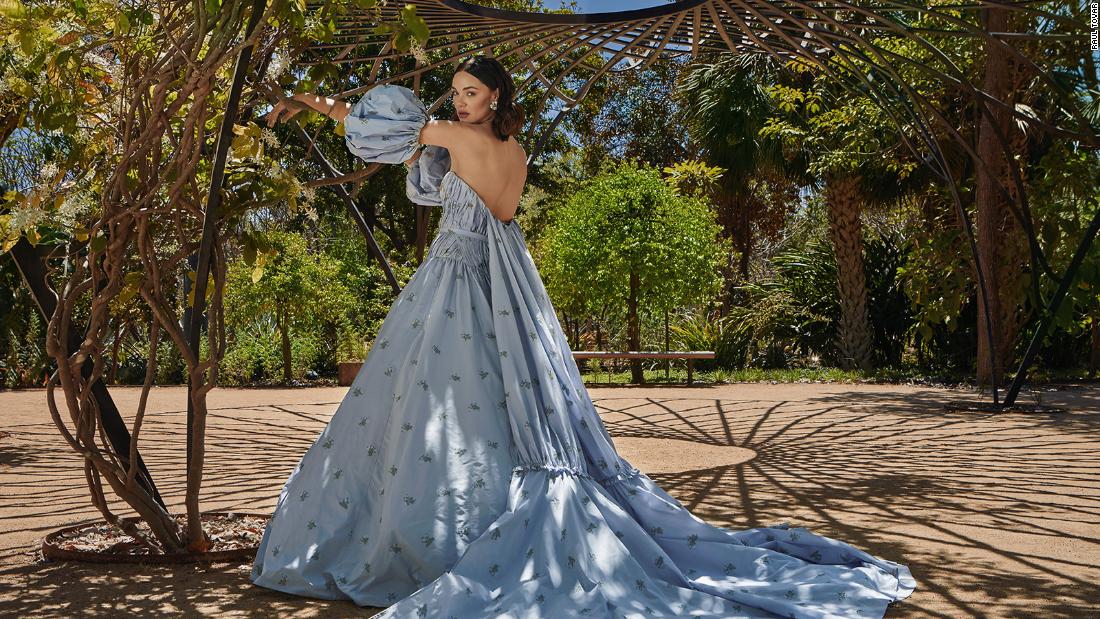 Wedding season is in full swing after two years of delayed or pared down “micro” ceremonies, and one thing is clear: Classic is out, wear-what-you-want is in.

For the big celebrity unions of the season, that shift has brought us Kourtney Kardashian’s corseted Dolce & Gabbana mini dress with a dramatic long veil of Catholic iconography, Chloë Sevigny’s eclectic mix of custom ensembles at her hometown nuptials, and Nicola Peltz Beckham’s old Hollywood glamour gown paired with chunky ’90s-style platform heels. Just last week, Britney Spears put a twist on a custom Versace gown when she accessorized it with an embellished, wide white choker.

And collections for 2022 and 2023 aren’t following a handful of trends but are flush with different silhouettes, details, textures and colors. At New York Bridal Fashion Week in April, designers offered idyllic gowns in colors like blue and blush, caped pantsuits, colorful floral prints, chic mini dresses, romantic barely-there sheer looks, and sartorial nods to various decades from the corset-wearing 1890s to the midriff-baring 1990s.

“With the pandemic having people spend way more time alone, and also realizing that their weddings at the end of the day are truly for them … all those supposed-tos go out the window,” stylist Carrie L. Goldberg, founder of CLG Creative and former weddings director at Harper’s Bazaar, said in a phone call.

The popular chain David’s Bridal is even offering black versions of its most popular wedding gown styles in select stores for the first time, following high customer demand for dark gowns instead of the traditional white Western dress. Pinterest is attributing the gothy inclinations to Gen Z, reporting in its 2022 wedding trend report that searches for “Dark wedding ideas” increased by 59 times during a 12-month period from 2021 to 2022 among that age group. (Searches for “Black boho wedding dress” and “Vampire wedding dress” each increased fourfold).

Stephanie White, who helms the dreamy, fashion-forward bridal label Odylyne the Ceremony, noted she thinks brides are gravitating toward “more texture” and “less-traditional” silhouettes that include playful notes, like oversized shoulders.

“Billowing ruffles and long trains are a favorite these days … and we have had so much success with these details as well,” she said in an email.

On the flip side, those seeking simplicity, like a streamlined silk dress, are opting for accents like gloves or headpieces to personalize their looks, she added.

But the appetite for more non-conforming bridal styles doesn’t necessarily mean a trend toward the less luxurious. In fact, Goldberg is seeing the opposite.

“I was expecting the return to regality, drama … just because we’ve been indoors for so long,” she said. “And I think that that obviously speaks to the formality of how weddings have sort of taken a new turn over the past year and a half.”

Like Sevigny, who changed from a gauzy couture Jean Paul Gaultier gown into a long-sleeved Loewe reception dress, and finally, a sheer Thierry Mugler catsuit designed by Casey Cadwallader, the desire for heightened style has translated into multiple outfits, Goldberg said.

She is also excited by this season’s haute couture options, as well as the luxury runway designers trying their hand at bridal, like the custom gilded Schiaparelli dress that creative director Daniel Roseberry designed for his sister’s nuptials earlier this month.

Schiaparelli’s creative director Daniel Roseberry designed a dress for his sister Liz to wear at her wedding, adding a touch of his signature surreal style with these glasses. Credit: Becca Neblock

“Fashion and bridal don’t have to be separate worlds.”

The era of shopping at bridal superstores is passing, as more designers get into the mix, according to Goldberg.

“The market has more options than ever before. And I think that designers are far more direct-to-consumer than they’ve been,” she explained. “I think that it used to be all about multi-brand stores. And now it’s more about designer flagships, and so designers are hearing the client a lot more directly and they’re answering the call.”

But defining one’s wedding style can be intimidating, and more options mean more decisions to make, particularly when one can get sucked into the rabbit hole of wedding references on Instagram and Pinterest. Goldberg recommends more in-person research rather than endless internet browsing.

“(Try) on one dress of every silhouette and one dress of every fabric, and looking at those aspects in isolation is how you can (arrive at) the perfect dress,” the stylist said. “First answer which neckline you like best, then sleeves and so on. Then you can start asking for it in a more educated way as you go from store to store.”

Designer Stephanie White of Odylyne the Ceremony believes maximal texture and playful details are winning over her clients. Credit: Aja Hitomi/Odylyne the ceremony

Goldberg also cautions against making decisions before trying anything on. “There’s such a thing as being overprepared and I think allowing for that magic of the discovery … is definitely worth considering.”

In the time of limitless choices, though, it’s especially important to stay true to your own personal taste, she added.

“Listening to yourself and your gut feeling rather than the voices around you is important.”