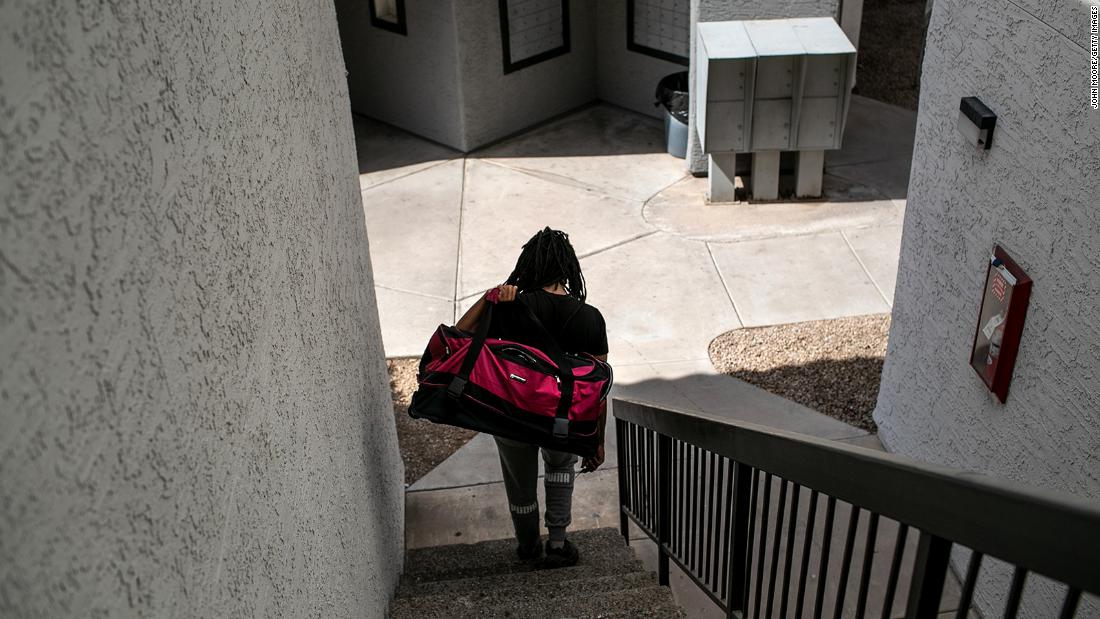 The number of renters that fell behind on rent peaked at 15 million in January 2021, the report showed. Since then, federal aid programs — including billions of dollars in rent relief and an eviction moratorium — plus a recovering economy, have reduced that number. But there remained 10.4 million renters who said they are not caught up on rent as of March, according to CBPP.

By September 2020, 55% of all adult renters reported a loss of income due to the Covid-19 pandemic, but for Latino and Black renters the share was even higher, at 65% and 57% respectively. Ultimately, those renters were put at risk of eviction and homelessness, spurring the federal government to take unprecedented action.

“We see that these short-term relief measures that were passed during the pandemic make a difference,” said Alicia Mazzara, deputy director for housing equity and data analysis at CBPP. “They helped people stay housed. But it isn’t enough.”

CBPP’s research, which analyzed the Census Bureau’s Household Pulse Survey between September 2020 and March 2022, shows where the need for help still remains.

“The bottom line is that White renters are faring the best for all the structural, systemic and historical reasons with which we are familiar,” said Mazzara. “The most marginalized people were suffering the most and were overrepresented in any way we cut the data, looking at homelessness, rent instability or eviction.”

Where housing hardship hit the hardest

Black renters were especially susceptible to falling behind on rent during the pandemic. Because of a history of racist housing policies and discrimination in education and employment, Black renters are more likely to have lower incomes, pay a larger share of their income toward rent and experience eviction and homelessness, compared to other racial groups, the report found.

At the January 2021 peak, 33% of Black renters were behind on rent, compared with 25% of Latino renters and 12% of White renters. By March 2022, the overall share of renters in trouble had dropped, but it still remained higher for Black and Latino renters than White renters.

Renters with children consistently faced more challenges during the pandemic than those without kids. Research on eviction by Matthew Desmond, a professor of sociology at Princeton University, and others has shown the presence of children increases renters’ risk of eviction. In part, that’s due to the higher housing costs parents must take on in order to get more space and discrimination against families with children, according to the CBPP report.

Black renters with children faced the greatest hardship during the pandemic, according to the research, with an average of 32% saying they weren’t caught up on rent. That’s compared to 23% each for Latino and Asian families with children and 18% for White families.

The two states where adult renters were most likely to report being behind on rent, Mississippi, where 24% of renters reported being behind on rent, and Louisiana, 23%, also have the largest share of Black renters. In addition, the report found, high levels of hardship are driven less by high rents and more by low renter incomes that have stagnated in recent years in many states across the region.

“Despite some popular notions of housing hardship, like expecting more impact in coastal areas where housing costs are highest, hardship was concentrated in southern states,” said Erik Gartland, a research analyst on the housing team at CBPP. “This overlay of race and hardship reflects systemic racism and pre-pandemic disparities in housing that has grown as we have seen a disproportionate impact of the pandemic on Black and Latino workers.”

With rents now climbing to record highs — national median rents hit $1,827 a month in April, up 21% from the start of the pandemic two years prior, according to Realtor.com — renters who made it through the worst of the pandemic may be struggling anew.

The researchers said decades of slow home building in the United States has resulted in rising home prices and rising rental costs.

“Building housing takes time,” he said. “And any new housing isn’t going to be affordable to those at the lowest levels. You also need household level renter subsidies — housing vouchers — so they can pay 30% of their income unrelated to how much it costs to build it.”

Directly targeting entrenched systems of racial disparity is also critical, according to Mazzara.

Freddie Mac and Fannie Mae recently unveiled multi-year plans addressing inequity in housing, including a credit-building program for renters and financing the creation and preservation of affordable housing.

“It isn’t enough to do a one-size-fits-all fix,” she said. “What are solutions that not just prevent evictions, but provide culturally competent services? That is something that housing policy is figuring out.”