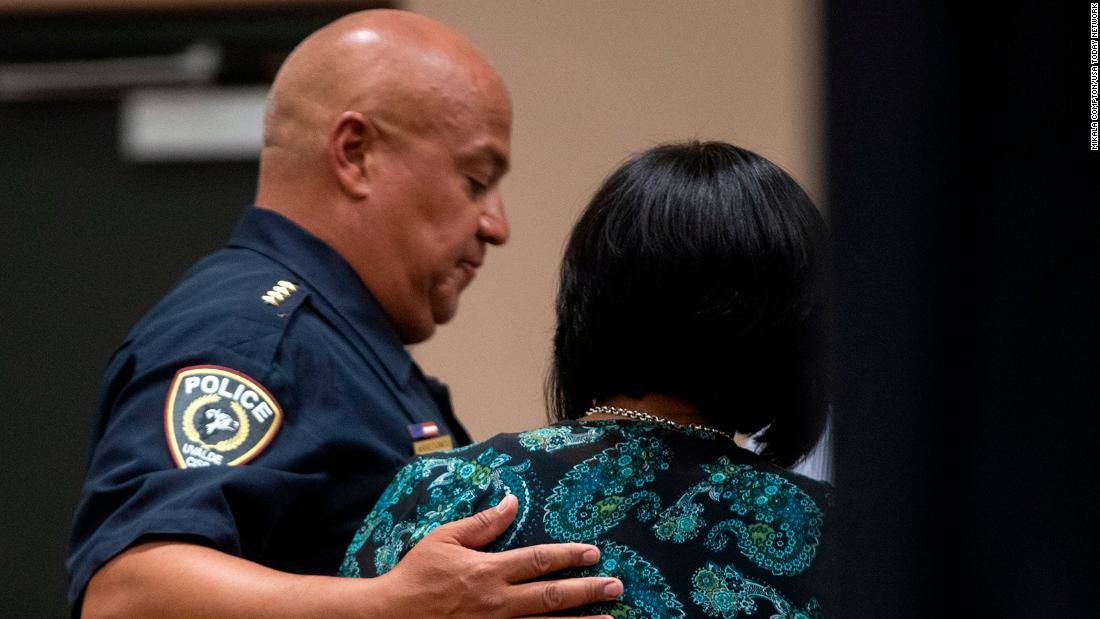 On Tuesday, the top Texas official in charge of the investigation described the response as an “abject failure.”
At the center of the furor has been the school district’s police chief Pedro “Pete” Arredondo. On Wednesday, nearly a month after the bloodbath, he was placed on leave.

“From the beginning of this horrible event, I shared that the district would wait until the investigation was complete before making personnel decisions,” Uvalde Consolidated Independent School District Superintendent Hal Harrell said in a statement.

“Today, I am still without details of the investigations being conducted by various agencies. Because of the lack of clarity that remains and the unknown timing of when I will receive the results of the investigations, I have made the decision to place Chief Arredondo on administrative leave effective on this date,” he said.

Arredondo and responding law enforcement agencies have faced fierce criticism over the length of time officers were stationed in a hallway outside adjoining classrooms 111 and 112 at Robb Elementary, where an 18-year-old gunman and the victims were located.
The gunman fired at responding officers in the first minutes of the shooting, two of whom received grazing wounds, according to an updated timeline from the Texas Department of Public Safety. Yet more than 70 minutes would elapse before the gunman was shot and killed by authorities who stormed the room.
Earlier this month, Arredondo told The Texas Tribune he didn’t consider himself the incident commander and did not instruct officers to refrain from breaching the scene.
Berlinda Irene Arreola, the grandmother of shooting victim Amerie Jo Garza, spoke at a tense city council meeting Tuesday where Arredondo was not present. The school police chief was elected to the council earlier this year and has stayed out of the public eye since the shooting.

“He failed us,” Arreola said of Arredondo to councilmembers. “Do not make the same mistake he made and fail us too. Go forward and make it right … please, please, we’re begging, get this man out of our lives.”

The council later unanimously voted to deny Arredondo a leave of absence from future council meetings, and the decision was met with applause from residents in attendance. According to the city’s charter, Arredondo could be removed from office if he fails to attend three consecutive city council meetings unexcused.

Arreola spoke with CNN Wednesday about the pain of losing 10-year-old Amerie as well as the subsequent fallout, with preliminary details from investigations indicating that more could have been done sooner.

“It’s getting harder and harder every day as far as missing her, the hurt that we feel. But also with the anger that’s unfolding before our eyes,” Arreola told CNN’s Brianna Keilar.

“We have to speak for all these children, all these families. We have to make things right, we need to get down to the bottom of everything that has happened and find out the truth.”

Amerie’s stepfather, Angel Garza, was a medical first responder to the scene of the shooting and told CNN Wednesday he did not understand how police failed to act when they were located outside the classroom, so close to the victims.

“I just don’t get how you can hear these kids crying and asking for help, but you’re scared to enter because your commander doesn’t want you to go in,” he said.

Parents, including himself, “were right outside” the school. “I was trying to get in, I was put into handcuffs,” he said, distraught that police he entrusted “didn’t save my daughter or any of the other kids.”

Arredondo testified to a Texas House committee behind closed doors on Tuesday regarding the day of the shooting and did not comment publicly. CNN has reached out to Arredondo’s attorney for comment.

Lieutenant Mike Hernandez is assuming the duties of the UCISD Chief of Police during Arredondo’s leave, according to the school district.

While Arredondo has received the lion’s share of public criticism for how police handled the crisis, the mayor of Uvalde was quick to point out Tuesday that he believes other law enforcement agencies also need to be held accountable and provide updates to city officials.

In pointed remarks at the city council meeting, Mayor Don McLaughlin accused DPS director Col. Steven McCraw of shirking his department’s responsibility and noted that officers from at least eight law enforcement agencies were inside Robb Elementary during the shooting.

“Col. McCraw has continued to — whether you want to call it — lie, leak, mislead or misstate information in order to distance his own troopers and Rangers from the response. Every briefing he leaves out the number of his own officers and Rangers that were on-scene that day,” McLaughlin said.

McLaughlin also decried leaks from unnamed sources he said were intended to shift blame over police response away from certain agencies and more toward local law enforcement.

“Col. McCraw has an agenda and it is not to present a full report on what happened and give factual answers on what happened to this community,” the mayor said, adding he was meant to receive a daily briefing from authorities since the day after the shooting but none has been provided.

McCraw on Tuesday at a Texas Senate hearing accused Arredondo of ordering police to wait for unnecessary equipment and keys to a door that may not have been locked as suspected.

CNN has reached out to the Texas Department of Public Safety for comment.