Why non-traditional engagement rings are here to stay 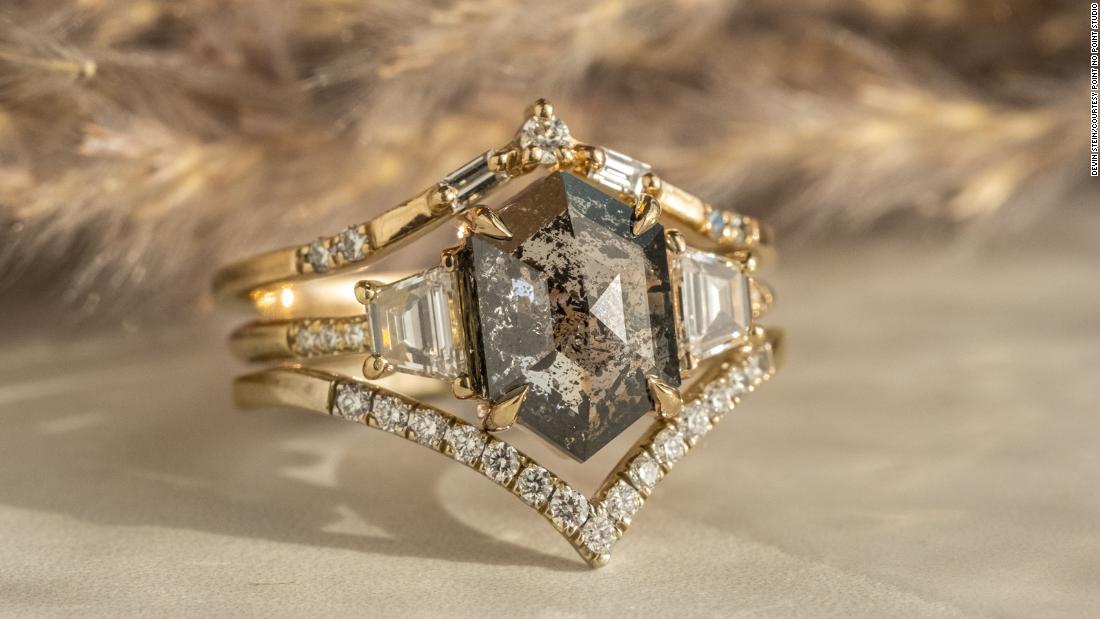 When you think of an engagement ring, what do you picture? Perhaps a sparkling solitaire stone, or a halo of smaller gems encircling a central jewel.

No matter the style, you’re likely imagining white diamonds, which have been the reigning symbols of marital commitment for over a century. But within the past decade, traditions surrounding engagement rings have loosened as colored gemstones and unique designs become prevalent across social media and on celebrities’ fingers.

Now, many jewelry designers offer engagement rings featuring sapphires, rubies and pearls — as well as “imperfect” diamonds, which can be raw, speckled with shades of gray or colored with hues like brown or pink — for couples in search of an idiosyncratic or more affordable ring.

“I think there is a larger shift in attitudes surrounding engagement rings,” said Leigh Batnick Plessner, the chief creative officer of New York jeweler Catbird, in a phone interview. “It should be something that makes you happy, and it doesn’t have to follow rules or traditions.”

Nonetheless, diamonds still reign, according to a recent survey by wedding publisher The Knot, with 86% of 5,000 respondents in the US preferring them as engagement rings’ center stone, and diamond doppelganger moissanite the next most popular option.

Diamonds have long represented “strength and a union” because they were considered to be the hardest stones in the world, said Marion Fasel, an editor and jewelry writer. They first came into fashion among royalty, popularized in 18th-century England by George III’s wife, Queen Charlotte, Fasel explained.

But diamonds only started becoming culturally synonymous with marriage after Tiffany & Co. introduced the modern engagement ring, with its now iconic six-prong solitaire setting, in 1886. Then, amid the post-World War II marriage boom, a Philadelphia copywriter, Frances Gerety, coined the advertising “slogan of the century” for mining giant De Beers: “A Diamond is Forever.”

Since the 1940s, the value of diamonds has been measured through the “4Cs”: cut, color, clarity and carat weight, which were standardized by the Gemological Institute of America (GIA) and heavily promoted by De Beers.

“When it’s not white, it’s considered an imperfection,” said jewelry designer Julie Stark over the phone. Her studio, Point No Point, based outside of Seattle, specializes in black and “salt-and-pepper,” or gray-speckled, diamond rings. “(Even) champagne diamonds weren’t considered very valuable because they had a color to them,” she said, using a name often given to light brown-yellow stones.

There have been some high-profile engagement rings with colored gemstones in the past — Princess Diana famously wore a 12-carat blue sapphire halo with diamonds, and Jennifer Lopez received a 6.1-carat pink diamond from Ben Affleck in 2002. But while celebrity engagement rings ballooned in size and price, they mostly stayed traditional in color.

Brown diamonds have also had a moment the past two years, from Kate Hudson’s pink-brown jewel paired with rose gold to Scarlett Johansson’s 11-carat egg-shaped gem on a ceramic band believed to be designed by Taffin.

“(Brown) stones would not be looked at 10 years ago for an engagement ring like that,” said Fasel, who thinks celebrities’ choices trickle down to the consumer market. “When people make unique choices at a high-profile level, it gives women courage to do something that’s a little different than the traditional design.”

Around 2008, before Catbird began focusing on fine jewelry, chief creative officer Batnick Plessner and founder Rony Vardi noticed that one of their rings, a small white sapphire set in a willow branch-shaped band, was becoming an increasingly popular choice for engagements. Though only priced a little over $100, it became the starting point for the store to shift focus, including building out a 63-person jewelry studio. Catbird now sells engagement rings from various other jewelry designers, as well as their own, at prices up to $15,000 — and many of them are non-traditional.

Today, Catbird’s offerings include a romantic trio of rose-cut pale pink sapphires (as well as a version in blue) by designer Jennie Kwon, a regal grouping of six salt-and-pepper diamonds by Digby & Iona and a minimal solitaire black diamond from its own line.

Similarly, Point No Point offers distinctive rings, opting for intricate, antique-inspired designs that highlight the stippled shades of salt-and-pepper diamonds or the cloudiness of icy whites. “Just like a fingerprint or snowflake, they all have their own kind of markings, and translucency,” Stark explained. “We’re able to appreciate the beauty of something that’s not perfect.”

“Nature can create something that’s so perfect in its own right,” designer Ruth Tomlinson said of raw diamonds, Credit: Courtesy Ruth Tomlinson

London jewelry designer Ruth Tomlinson has also been influenced by the organic shapes of nature, producing pieces that echo the delicate geometry of coral or bursts of geodes. She often works with pastel-colored sapphires, in pinks or greens, because she favors the gems’ durability. But her first fine jewelry line highlighted the rough, natural textures of raw diamonds, which she believes offer an understated aesthetic that emphasizes the gem’s inherent beauty.

“Nature can create something that’s so perfect in its own right,” Tomlinson said in a video call. “I created a range that looked like the metal had seemingly grown around stones — like the whole thing could have been unearthed together.”

As tastes in gemstones have broadened, jewelers and consumers have also become more concerned with the environmental and social impacts of their engagement rings. The rise of conflict-free and synthetic lab-grown diamonds has shifted the industry, and many jewelers — including all those interviewed here — emphasize sustainability, working primarily with recycled gold.

“It’s a priority of our customers to know the provenance of the materials that we work with,” Batnick Plessner said.

Couples are also armed with more options than ever, and can easily search for independent designers anywhere in the world through social media and e-commerce sites. By the same token, independent studios also have more avenues to reach a wider customer base. Actor Zoë Kravitz, for instance, found her antique engagement ring through Instagram a few years ago, Fasel said.

“(Social media’s impact) is huge because people can get a closer look at rings,” she said. “They can browse for rings in a different way.”

Though non-traditional rings have edged into the market, diamonds are unlikely to be dethroned any time soon. They continue to be closely associated with love, and Bain’s most recent annual diamond industry report found that 60% to 70% of survey-takers in the US, China and India believe diamonds are “an essential part of a marriage engagement.”

But Fasel noted that gems go in and out fashion according to their availability, with the discovery of diamond mines in Brazil and South Africa in the early 18th and late 19th centuries, respectively, shaping our ring choices today.

In the mid 2000s, the diamond industry began warning that the world was running out of diamonds, according to Bloomberg. And while this is yet to happen, the global supply did peak in 2006 at 176 million carats mined, according to data collected for the Kimberley Process, a certification scheme established to halt the trade of conflict diamonds. Last year, amid the pandemic, the global supply fell to 108 carats mined.

The rise of lab-grown diamonds is further complicating the market, offering more affordable prices for gems that are chemically identical. The Knot reported that in 2021, nearly one in four couples from its survey had opted for a man-made center stone, up 11% over two years.

“We’re living in a glorious Renaissance period of engagement rings, there’s no doubt about it,” she said.